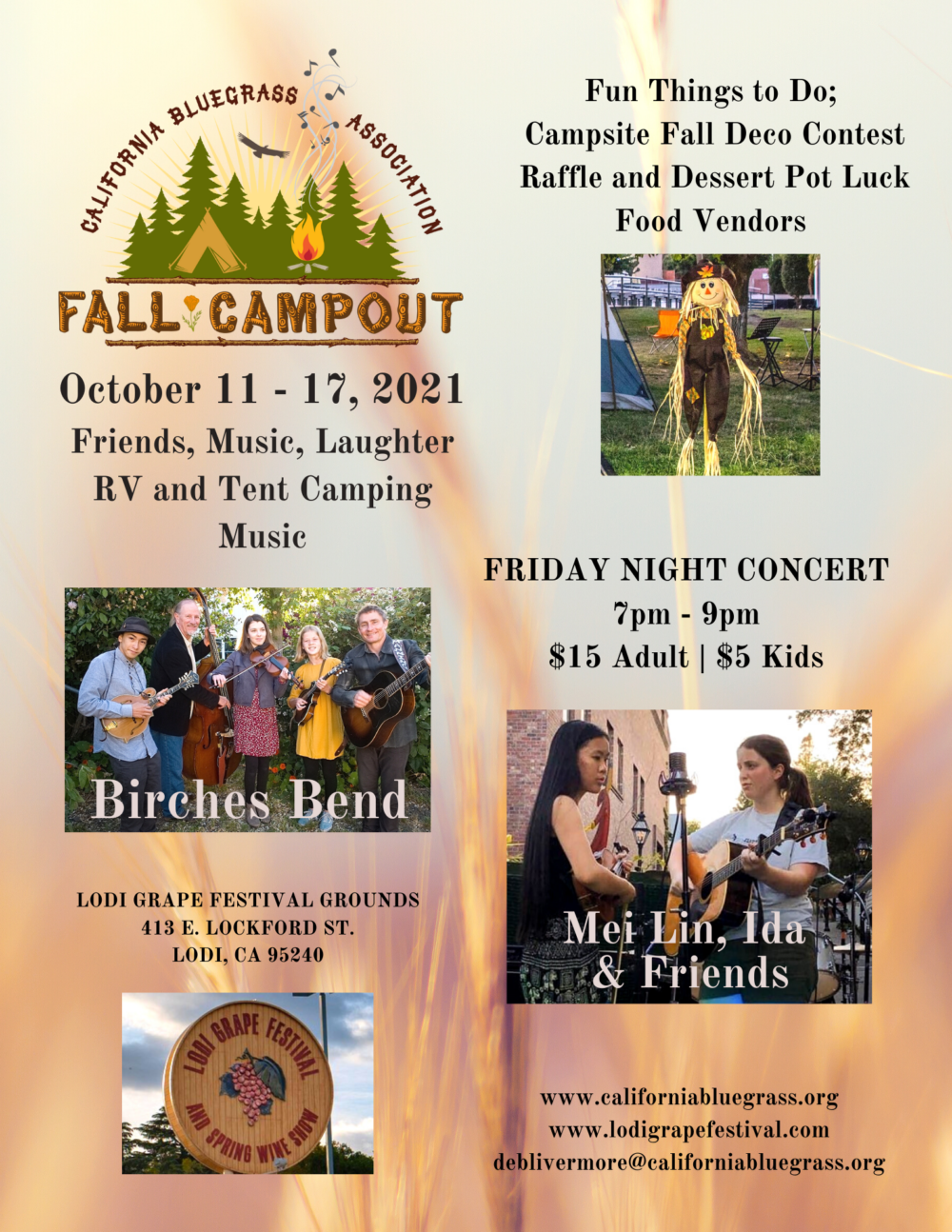 We are going to try something a little different. If you have been to the campouts in Lodi, you may have seen the amphitheater to the north of the site. We have never used this before and so you will be the inaugural audience for two wonderful, youthful bands on Friday night! “Birches Bend” and “Mei Lin, Ida and Friends”. We strive to have youthful musicians at our campouts because it is one of our bigger Youth Program fund raisers. So be prepared to donate for our Kids!!!!! The concert will be held from 7pm – 9pm.

Ranging in age from 13 – 16, these youth are the future of Bluegrass.  The band features Lucy Khadder (fiddle, vocals), Jasper Manning (mandolin) and Sophia Sparks (mandolin and vocals) with David Grisman Quintet alumni Chad Manning on guitar and Jim Kerwin on bass.  Expect to be delighted by their artful new interpretations of traditional and contemporary bluegrass music as well as their original compositions.  They have an eclectic reach with a sound that remains uniquely their own.

The band met through a common love of bluegrass music, and through studying at the venerable Manning Music studios in Berkeley, CA.  They have performed together since 2018, bringing their talents to farmer’s markets and a variety of public venues as well as house concerts in the East Bay.  In December 2018, the band was featured in a theatrical run of An Appalachian Christmas to great acclaim. After leading CBA youth jams and performing in the Kids On Bluegrass program at the Father’s Day Festival in 2019, they also participated in the International Bluegrass Music Association’s Kids on Bluegrass program in Raleigh, NC and performed as a California Bluegrass Association showcase band as part of the 2019 IBMA festival. In September, 2019, the band was awarded 1st place at the 2019 Berkeley Old Time Music Festival String Band Contest

Ida Winfree (17) and Mei Lin Heirendt (15) are talented young musicians based in Northern California. Each grew up in musical families and met at the California Bluegrass Association’s annual Father’s Day Festival. Together, the two mix bluegrass, country, Americana, and numerous originals into their sound. Both are skilled singers, they take turns on lead vocal and blend their harmonies beautifully. Keep an eye out for their new band, West 45.
Ida Winfree was the Youth Ambassador for the California Bluegrass Association from 2017-2019. She is the mandolin player for North Country Blue, which has played countless festivals and released multiple top-notch recording projects. She has also been invited to sit in with well-known bluegrass bands Sideline and One Button Suit.
Having started classical violin at the age of 7, Mei Lin Heirendt was the 2017 Concertmaster for the Music In The Mountains Youth Orchestra. Since then, she has shifted her focus primarily to bluegrass. She performs regularly with her local trio, Boston Ravine, which recently released a new album titled Ragged Road. Mei Lin has had the honor of sitting in with highly respected bluegrass bands The Grascals and The Kathy Kallick Band.