Getting to know fiddler Deanie Richardson 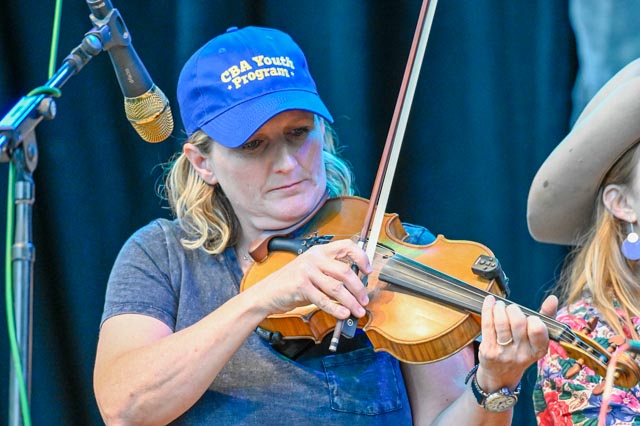 What an interesting and inspiring story our guest Deanie Richardson has.  Dean is fiddler for the IBMA nominated all female bluegrass group Sister Sadie.  She grew up in a very musical family about 30 miles west of Nashville, in the small town of Kingston Springs, Tennessee.   Both her grandfathers and father played music.  Her brother is a renowned clogger on staff at the Grand ole Opry.  At nine, she picked up the fiddle and made her first appearance at the Grand Ole Opry at the age of 13.

Deanie plays everything from upbeat, bluegrass tunes to tear-jerking country melodies. She studied for three years at the Blair School of Music with Craig Duncan. She entered and won numerous fiddle contests before playing bluegrass or bluegrass festivals.  Her entire childhood consisted of music.

In January 2019, Glide Magazine journalist Trevor Christian tells readers, as stated by Deanie  “one of my passions is old country music. I grew up around the Grand Ole Opry and I was always going backstage there when I was a kid. That is a true passion of mine and wanted a good country shuffle on there, so I got Dale Ann Bradley to sing it. My brother is a clog dancer on the Grand Ole Opry; he’s been doing that since he was 15 years old. I’ve always had this vision of recording the song with his feet, just his rhythms tapping out. During my time at the Grand Ole Opry, now I’m one of the staff members there, I’ve gotten to play a lot with and get really close to Mike Snider, who’s one of the members. I also grew up doing fiddle contests and I wanted even to go back that far. So there’s a couple of the tunes that I played when I was doing that when I was a kid.”

She was nominated for the Academy of Country Music Awards Top Fiddle Player of the Year for 2010.  She was greatly influenced by Stuart Duncan, Nashville’s busiest studio fiddler for years.   Along with Duncan, Richardson was captivated by Mark O’Connor, Howdy Forrester, Kenny Baker and Tommy Jackson.   Deanie also plays mandolin and acoustic guitar.  Breaking news at this time is Deanie was nominated by IBMA (International Music Association) as fiddle player of the year.  That is no mean feat.  She is up against Becky Buller, Jason Carter, Michael Cleveland and Stuart Duncan.  These are all incredible players.

She has shared the stage and recording studio with Vince Gill, her good friend Patty Loveless, Bog Seger, Dale Ann Bradley, Emmy Lou Harris, Ry Cooder, David Olney, Hank Williams Jr., Del McCoury Band, Marty Stuart, Travis Tritt and Holly Dunn (to name a few).  Included in this impressive resume is a tour with the Chieftains, Vince Gill and Bob Seger. She has had television appearances on Letterman, Leno, Conan and the Today Show.  Some of her impressive achievements are performances at Kennedy Center, Carnegie Hall, London’s Royal Albert Hall.  Let’s not forget all the touring, France, Germany, Italy, Japan, Scotland, Ireland, Denmark, Norway, Holland, Austria, Belgium and Switzerland.  She radiates immense energy on stage.  You feel like you’re right there with her as she plays out her solos.  According to the biography on her website, she says “her fiddle vibrates her entire body as she plays”.  (https://www.deanierichardson.com/)

In 2016, along with Dale Bradley, Tina Adair & Gina Brittt she formed Sister Sadie, a chart topping highly energetic bluegrass group.  What a high-powered group this band of ladies is, both on stage and in the recordings.  Sister Sadie is one of the rare groups that actually radiates energy in their recordings.  Their recordings have been immensely successful.

She has been a mentor to many young musicians, as well as adults learning fiddle I’m not a big fan of festival workshops, but I’ve sat in on her workshops and she leads some of the best bluegrass workshops I’ve ever attended.  If you have an opportunity to hear her at a festival and she’s doing a workshop, you have to go.  She loves teaching and she’s good at it.  She’s particularly passionate about kids.  It’s given her the opportunity to nurture the next generation of bluegrass pickers.  She has shared her liveliness and love for music with many students over the years.

Talking about her recent solo album “Love Hard, Work Hard, Play Hard”, and the history behind it, she shared that she did her first solo album at 12 or 13.  She wanted the most recent record to be a mix of genres, reflecting her career playing multiple styles and genres.  She wanted to include artists she’s played with.  She named one song after her grand-daughter, who she is currently raising.  Her clogging brother appears on her record.  He was a big part of her growing up.  You’ll hear lots of bluegrass instrumentals, a rag, a country song even an Irish folk melody.

She spends a lot of time with her grand-daughter, teaching her in bits and pieces but realizes ““the little one may take another direction than grandma. She’s very musical, has great rhythm.  It’s a fun thing right now.”

When asked what she would you say to aspiring fiddlers about learning, she commented
“For me, being a teacher, you have to learn something in parts (segments) Take it apart, measure by measure, start slow, then speed up.   Focus on intonation, tone, bowing.  slow down..  She likes to use fiddle tunes as exercise   Classical violinist Ytzak Pearlman has a video explaining about breaking down the song, get the playing to breathe”
I wanted to know more about the Kids on Bluegrass program, where it is and how long does it last?  “It’s a part of the youth program during IBMA convention annually.  She’s been a part of it at least 10 years, every year about March, we put this app on line telling about themselves, why they want to be part of the program. They chose anywhere between 25-30 kids to participate in the program. They learn how to be part of a team/band and get to perform.  They work out solos, harmonies, etc.”  It’s clear she has an enormous passion about kids & music.  She has a “pay it forward” attitude.

What’s the best advice you’ve ever gotten?  She led off with a great story about the father of bluegrass, Bill Monroe.  She was about 17 or 18 when Monroe was playing in Henderson, Tennessee with Larry Cordell.  Larry had called her to sit in one night.  She didn’t grow up listening to Monroe, but mostly to progressive players.  When it came time for a solo Bill looks over at her.  She thought he was asking her to do a solo.  Bill Monroe had a legendary way of telling his players just how he felt about what they were or were not doing.  “Little girl you can’t play ‘em all!.”  What she got out of that is “less is more”

Since she lives on a small farm outside of Nashville, her newest obsession is with  the 25
chickens she has and her garden.  Before COVD19 hit, she was going to slow down.  So now, she’s got two gardens.  Are you seeing a trend here?  This is one busy lady!

Like many guitar players obsessed with the kind of guitar they play or buy, I asked her about her about the great sounding fiddle she plays and how she came across it.  In  2007 she was going on the road with Vince Gill.  She went into town to a violin shop and the owner told her about this fiddle he felt she should look at.  She played it, loved it, and borrowed it to take on the road with Vince.  When she returned home, she took all the Vince Gill money she earned and bought the Colin Mezin fiddle, circa 1880.  As for a bow, she prefers using a German Pernambuco bow.

This is a nice segue into a story about the tattoos on her arms.  “I was going through a bad time in my life and I went to this tattoo guy with my fiddle and he traced the f-holes out and put it on her arms.   Talk about devotion!

Her current record label is Pinecrest.

Deanie is available for private lessons, events, session work, recording tracks (from her home base, touring and in and out-of-town dates.