How Missy got hooked 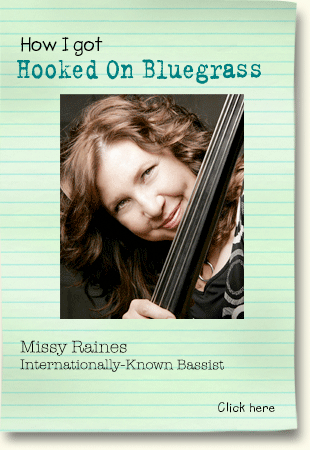 I got hooked on bluegrass music as a small child going to Carlton Haney Bluegrass festivals in VA, PA, MD and NC and watching folks like Bill Monroe, The Country Gentleman, The Osborne Brothers, JD Crowe, and tons of others up close and in person. I was caught up by the magic of their performances and the electricity in the air in the audience.

Probably the most special festival for me was Watermelon Park, in Berryville VA. It was only about an hour’s drive from my home and my family went there every year. We camped all week long, it was almost a sacred event. I even learned to swim there in the Shenandoah River. I’ll never forget sitting in the audience or standing right next to the stage and watching the performers, it was absolute magic. Things were pretty loose then and no one paid any attention to a couple of kids hanging around, so I could go right backstage and watch the performers on stage from behind. I think I became a fan for life at that point.

In addition to going to shows and festivals, music (of all kinds) was always on the stereo at our home. Once my dad brought a bass into our home and I started playing it, I never looked back. I had already been listening to tons of recordings with Tom Gray playing with the Country Gentlemen and the Seldom Scene and I knew I wanted to do what he was doing.