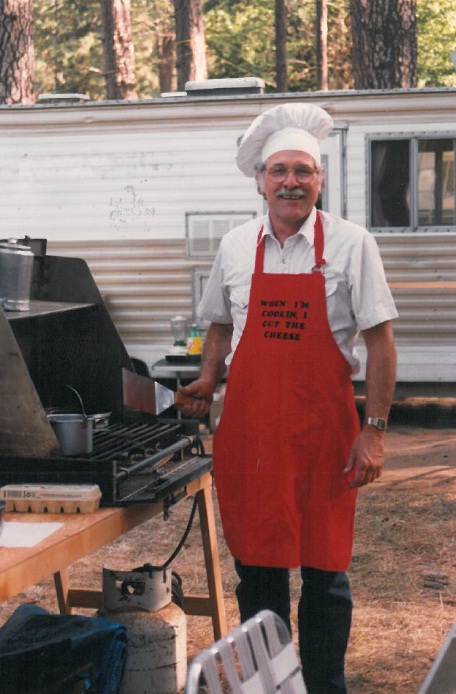 J.D. Rhynes was at Jack Sadler’s pickin’ party that hot summer night in 1974 when plans were made to form the CBA. For decades, starting in the 1950s, he played bass or rhythm guitar with his great friends and fellow Arkansans, Vern Williams and Ray Park. He also played bass on two albums with Rose Maddox and the Vern Williams Band.

The CBA’s first Director Emeritus, J.D. has made road trips, been to picking parties and hung out with most of the luminaries in Bluegrass. He served as the backstage manager for the CBA festival and was on the CBA Board of Directors for 19½ years. For decades, J.D. was one of the best-known emcees at the CBA and other festivals, introducing Bluegrass stars onstage and hanging out with them backstage. Select bands at the CBA festival have been treated to his full breakfasts that include cowboy coffee and biscuits baked in a cast iron Dutch oven.

An excellent cook, for 28 years J.D. wrote “Bluegrass Kitchen,” the popular monthly cooking column in Bluegrass Breakdown. Some of his best recipes and tales from life were gather in a book, JD’s Bluegrass Kitchen: Comfort Food the California Bluegrass Way, published in 2015 as a fundraiser for the CBA’s Youth Program. J.D. is a funny and masterful storyteller and has written over 100 “Welcome Columns” for the CBA’s website. Read those columns and you’ll learn that J.D. was there for a lot of the important moments in California Bluegrass history.