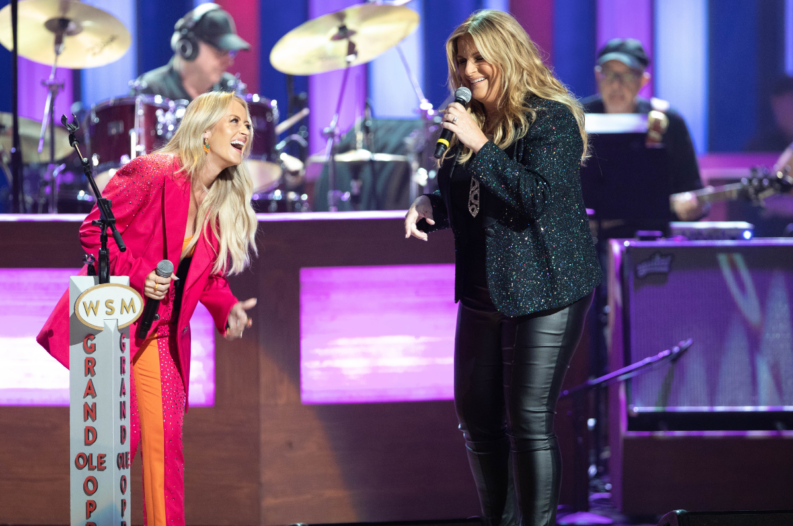 Trisha Yearwood’s “She’s in Love With the Boy” is one of the biggest country music hits of the 1990s. But when Yearwood made a surprise appearance at the Grand Ole Opry last Friday night to perform the song with fellow Nashville artist Brooke Eden, there was a twist.

Eden recently went public with her relationship and engagement to Hilary Hoover, a promotions director who works with Yearwood and her husband, country superstar Garth Brooks. In honor of Pride Month and Eden and Hoover’s engagement, Yearwood changed the lyrics to her famous song. She replaced the characters’ names “Tommy and Katie” with “Brooke and Hilary” and swapped the gender in the chorus: “She’s in love with the girl … What’s meant to be will always find a way / She’s gonna marry that girl someday.”

“Love is love — you can’t just say it, you got to mean it,” Yearwood said onstage, gesturing to Eden. “She’s in love with the girl. I’m in love with the boy. Let’s just sing it for everybody.”

It was a moving and landmark moment at the Opry, known as the home of country music, for a genre whose gatekeepers are well aware of the conservative fan base that makes up a significant portion of its audience. As a result, some gay country artists have felt pressure — and are sometimes directly cautioned — to hide their identity. Eden met Hoover in 2015, but after warnings from some on her team that she could lose her career if fans knew she was dating a woman, she kept their relationship under wraps until last year.

In a phone interview, Eden said she got a call from Yearwood about two weeks ago with the idea for the performance. Eden’s first reaction: “Are you sure?”

“The people at the Opry are absolutely incredible and such allies and such supporters of the LGBTQ community, but it’s such a conservative audience, usually,” Eden said. “I was just nervous about it.”

Yearwood assured her she was serious, and Eden was so overwhelmed with the idea that she burst into tears. They both remained anxious the day of the show (“I told her, ‘I even worked out today, and that doesn’t always happen,’ and Trisha said, ‘I did, too!’ ” Eden joked) but were thrilled by the positive reception from the crowd, who cheered when Yearwood mentioned Eden’s engagement and Pride Month.

“We wanted to do it right, and we wanted to have respect for the fact that this was the first time anyone had done something like that on the Opry stage,” Eden said. “Then the Opry audience was so supportive and loving. It just shows the evolving of the country music industry and what is happening here because people are stepping out and choosing to be themselves.”

The morning after the show, Yearwood said during a Facebook Live chat that fans have approached her through the years and whispered, “Don’t tell anybody, but I sing ‘He’s in Love With the Boy’ at home” or “I sing ‘She’s in Love with the Girl.’ ” That helped inspire Yearwood to perform with Eden, whom she added “just made a bold choice to be really honest about her life.”

“I just thought, wow, I get to sing open and freely about the way I feel all the time, and there’s a lot of people in the world who have not had a chance to do that,” Yearwood said. “So I thought last night was important for Brooke, for the world and for country music.”

Yearwood and Eden’s duet is one in a series of events that has made up a Pride Month unlike any other in country music. In early June, pop star Miley Cyrus filmed a concert special called “Miley Cyrus Presents Stand by You” at the Ryman Auditorium in Nashville, which debuted on Peacock last week.

In an Instagram post, Cyrus — a Tennessee native who often boasts of her country roots — said the event felt like “a peaceful protest” given the “laws endangering the LGBTQ+ community all around the country and even here in my home state.” In the middle of the concert, she noted “country music is all about authentic storytelling, and the more people we welcome in and allow them to be who they are, the more personal stories we will get to hear.”

Cyrus invited country music LGBTQ allies to perform alongside her, such as Little Big Town, Maren Morris and Mickey Guyton. She also asked Orville Peck, the gay country artist known for his fringed masks, to duet on the Chicks’ “Cowboy Take Me Away.”

Peck was delighted by the invite — the fact that it was a Pride special at the Ryman (called the “mother church of country music”) made it a “no-brainer,” he said. He appreciated the significance of Cyrus hosting the show in Nashville in such an “unapologetically prideful” way, which seemed like an intentional move.

“The world of country music still has unfortunately a lot of — I wouldn’t say barriers, but definitely roadblocks, with regards to the LGBTQ community,” Peck said. “Anytime someone like Miley uses their platform to bring different perspectives into mainstream country music, which exist but are not always put on display, it’s special. It’s the kind of thing you have to do to make change, and show people there are gay country musicians and artists and we love country music just as much as everyone else.”

While LGBTQ singers and songwriters have always been a part of country music, they have become more visible in recent years. “I think the expansion of identities and acceptance within country music has been long overdue. Everyone’s really ready for it,” Peck said. He pointed to the duo Brothers Osborne, who performed Pat Benatar’s “We Belong” on the special; T.J. Osborne came out in February, making him the only openly gay male country singer on a major Nashville label. Artists such as Osborne, Peck said, will only help pave the way for future artists.

Osborne spoke about this last week during a candid interview with Esquire, in which he detailed the positive reaction he has received while being realistic about the challenges. “While I’ve been loved and accepted, there’s still a lot of hate for me and for people like me,” Osborne told the magazine. “We can’t forget that and act like our work is over. It’s still really hard.”

Similar topics arose during a recent CMT roundtable titled “Queer in Country Music: A Conversation,” with CMT host Cody Alan moderating a discussion between Brandy Clark, Billy Gilman and Chely Wright. Wright, the groundbreaking artist who came out in 2010, said even though there have certainly been many encouraging changes in country music for LGTBQ singers, there is still concern for some about speaking out and potentially losing part of their fan base. “How many in the world would share a secret about themselves that they know would cause them to take a 20 percent pay cut at work?” she asked during the event.

But the conversation mostly focused on the positive evolution in Nashville. CMT has held Pride events in-house before, but this year, the network posted the roundtable on all its digital platforms. “Every year, the word seems to be getting out that country music can talk about this, and there are things that we can do to show our love and acceptance,” Alan said in an interview.

Alan, who came out publicly in 2017, said he couldn’t have imagined then that a mainstream star like Cyrus would one day hold a Pride special in downtown Nashville. “Her holding the concert did send a message, and that is that we can come together, and that your perceptions of what Nashville and what country music is or was has changed,” he said. That point was emphasized for him during the CMT conversation when Clark talked about how she wondered if those in her rural Washington state hometown would accept her, but then discovered they were some of the most compassionate people.

“So much of what I’ve learned is that our perception of what the audience is, or what we think it is, is not in line with what is true,” Alan said.

Clark, the Grammy-nominated singer-songwriter, agreed, noting that’s why the Yearwood-Eden moment on the Opry stage was so special. “I think people would stereotype that crowd as not being accepting of something like that, and I think that’s probably 75 percent wrong,” she said. “I believe that most people have a lot of love in their hearts.”

This year, Clark said she has been asked to participate in a lot more Pride events than usual. “I’ve been asked by country outlets, and I don’t know that’s ever happened in the past, so that’s a great thing,” she said. “I think everyone is trying to be more inclusive of all groups … like everything, it’s an evolution, and all the people on that panel have all taken steps to make it so that [a country music career] is possible for someone else.”

Pride Month officially wraps up Wednesday night with country singer Ty Herndon’s sixth annual “The Concert for Love and Acceptance,” a show in partnership with CMT that will be live-streamed on the network’s Facebook and YouTube channels. Herndon was inspired to create the concert after attending an event at CMA Fest held by Wright, one of his heroes. Though at first he wasn’t sure anyone would show up, the inaugural show drew a sold-out crowd. Now, artists clamor to be part of the lineup, which this year includes Eden and Brothers Osborne, as well as Gavin DeGraw, Terri Clark and Kristin Chenoweth.

Herndon looks at the success of the event as part of Nashville realizing it has the opportunity to “have a better heartbeat” and support LGBTQ singers. “We’ve got a long way to go,” he said, “but the doors and windows have been opened.”