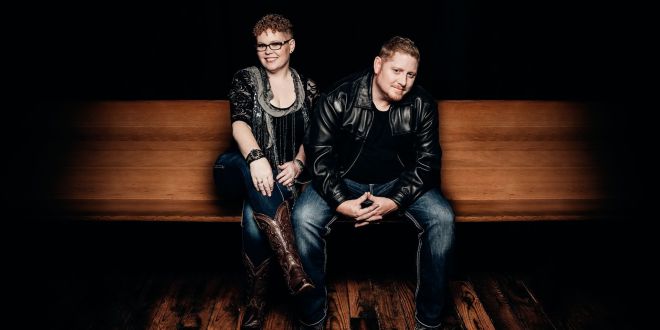 With every new album comes a new chapter in a band’s career. For award-winning acoustic group Nu-Blu, they’re kicking off the new era with the launch of a hard-hitting new single called “Horse Thieves and Moonshiners.” To celebrate the release, they’re also unveiling the nostalgic western-themed video, which was filmed while the band was on tour earlier this year.  You can  view the video here: https://www.youtube.com/watch?v=XjwTuuH8V8I&feature=youtu.be

Nu-Blu is led by husband/wife pair Daniel and Carolyn Routh. Rounding out the band are rising musicians Justin Harrison and Austin Hefflefinger, who each bring the necessary flair to complete the group’s unique sound. Though Nu-Blu has been together since the mid-00s, their sound continues to evolve. With the edition of Harrison and Hefflefinger, Nu-Blu is taking the next step into the future by capturing a sound that is sure to set the world on fire. The down-home feel to “Horse Thieves and Moonshiners,” combined with powerful vocals of Carolyn Routh serves as the perfect lead single from the group’s forthcoming album.

Nu-Blu has gained much attention for marching to the beat of their own drum. While staying true to their Bluegrass roots, they also expand their sound by gaining inspiration from a variety of different genres. Over the years, they have teamed up with the likes of Soul legend / Rock & Roll Hall of Fame member Sam Moore (from the duo Sam & Dave), Country Music Hall of Fame Statler Brothers singer Jimmy Fortune, and most recently Contemporary Christian artist Jody McBrayer from the group Avalon.  Nu-Blu also hosts the nationally-syndicated show, “Bluegrass Ridge” which airs in millions of homes weekly on multiple networks including Heartland, Circle Network and many more.

We spoke to the band about their adventurous new single, “Horse Thieves and Moonshiners,” while also discussing what the future looks like for the band. Check out our conversation below!

Can you give us a little background about the message and inspiration behind the song?
Carolyn Routh: It’s a story we all have. Though each of us has a different one, it’s strangely the same. It’s where we came from, a part of who each one of us becomes as a person. When we heard ‘Horse Thieves and Moonshiners,’ we knew that this would be the perfect song to lead off this new project. I say project, because it’s different this time. We aren’t just making an album, or music, we are making a narrative. It’s one that each of us simultaneously are writing and telling every day. After all, before you can know who you are, you have to know where you’ve been.

Where was the video shot at? It seems like the perfect location given the song’s lyrics.
Daniel Routh: As you can tell, we had a blast doing this video, but it really is the video that almost didn’t happen!  We were on the west coast last March when the COVID lockdowns started happening. We were headlining a show in Vegas and the word we got was that it was still a go, so we continued with plans for the shoot.   Our first shooting location was in the mountains above Palm Springs.  It was a great place, but the wind, rain, and cold weather moved in on our planned shooting days, and we were unable to shoot any footage. This was our only window of time due to the tour schedule, so needless to say we were pretty bummed that all the planning and effort to make this was just gone.   As we were packing up to head from CA to Vegas, we got the call that not only the event in Vegas, but the rest of our tour had been cancelled due to COVID.  That meant no performances, but opened up an opportunity for another chance to shoot!

A friend of ours had a connection to allow us to a movie set in the middle of the Mojave Desert.  We checked the weather, and realized that we had about a day and half before the rain and cold would move up that far, so we rolled up into the high desert as fast as we could.   We were able to get in about a day and 3 hours of shooting before the storms caught up to us, but that was just enough!  It really did turn out to be the perfect location, and made the song come to life.

In what way do you relate to the song?
Carolyn Routh: Recently, I found out some history about my great-Grandfather that I didn’t know.  I discovered that early in life he was a sheriff’s deputy.  Perhaps this is why I was heavily involved with the local rescue squad and fire dept. earlier in my career?  You never know if one of your passions could be passed down through a descendant, even one you don’t know about!

What line in the song stands out most to you?
Daniel Routh: “Like a feather on a restless wind, through the past and back again…”  It’s gotta be this line.  It’s this constant continuation of yourself, passed on through generations. Even though we all have our time, we all still leave our mark and pass on parts of us through those that we interact with.  For us, I think it’s an even greater legacy that we can leave our music, something that will live on long after those that know us now are gone.

What can fans expect from Nu-Blu for the remainder of 2020 and into 2021?
Nu-Blu: Well, at the current moment our touring is still being very limited due to the COVID.  Many of our shows have transferred over to 2021, so at least we will be able to make up for lost time then!

We certainly haven’t let the lack of touring due to COVID slow us down.  In fact, I think that it’s opened many doors that wouldn’t have been opened otherwise.  Bluegrass Ridge, the TV show we host has been picked up by 3 new channels for syndication.  Taking us into over 140 million homes each week in the US and 5 countries.  We’ve been busy in the studio finishing up the new album which will debut in Jan 2021, and we’ve got some BIG surprises in store for everyone with this project.

This is our first project with our new bandmates Justin Harrison and Austin Hefflefinger, and all we can say is, ya’ll hold on, cause this new album is gonna be the best one from Nu-Blu yet!