Polings getting the word out 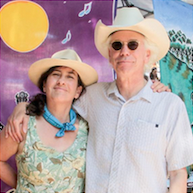 Wrap them all in one big ball and then you’ll understand what Hardly Strictly Bluegrass means to us. It’s our High Holy Days of music, and for the next couple of weeks we’ll be planning and preparing for this most wonderful time of the year.

For the past few years, that preparation has also included a special performance at our September Free Range Fridays featuring the musical members of the Hellman family. Several of the family acts will be appearing onstage at HSB, and our comfy coffeehouse show is the perfect tune-up for them.

Through the continuing generosity of the Hellman family, Hardly Strictly Bluegrass continues to flourish as the best free music festival in the galaxy. The late Warren Hellman, the founder and funder of the festival, created HSB as a way to share his love of American roots music with a couple hundred thousand of his close personal friends. He unabashedly admitted that it was the most selfish thing he’d ever done, because it provided him not only with a gig for his band, the Wronglers, but gave him a chance to rub shoulders with his favorite musicians.

But, you know, actions often have unintended consequences. His family, originally befuddled by Warren’s musical mania, slowly came around. Instruments that hadn’t been played in years came out of storage. Voices that had previously been restricted to singing the shower or garden were now blending in harmony – on stage!

Now, we’re happy to report, the various Hellman bands (there are at least three more that couldn’t make this event) are every bit as besotted with performing as anyone who has ever played a Free Range Friday show. Their passion for music and performing really comes through on stage, and they’re smart enough to know that recruiting some kickass sidemen like the legendary Austin DeLone only makes them better.

In addition to all the hoo-hah over Hardly Strictly Bluegrass, this show is really special to us because it falls on the 40thanniversary of the day Jeanie moved to San Francisco. She had previously visited and, like many people, fell instantly in love with this crazy, quirky city so much unlike her native Long Island, and vowed to make it her home. And she has. With the zeal of a convert, Jeanie has long since earned her status as a naturalized citizen of San Francisco. She even married a native! How San Francisco is that?

Over the past four decades she’s sung a lot of songs, strummed a lot of chords, and entertained a lot of people. This Friday she’s reaching back to that time to play a few tunes that remind her of her California homecoming. Come out and join us to celebrate.

Advance notice for a fun show at the Lucky Horseshoe…
Jeanie and Jody Richardson, aka the BettyJacks, will be sharing the bill with the twanging, swinging sounds of Midnight in Laredo.
Thursday, Oct 3
The Lucky Horseshoe
453 Cortland Ave, SF
8 p.m./no cover/21 and over
https://www.facebook.com/events/672685723195989/


Want to change how you receive these emails?
You can update your preferences or unsubscribe from this list.