The Face of Solo Guitar Is Changing. It’s About Time 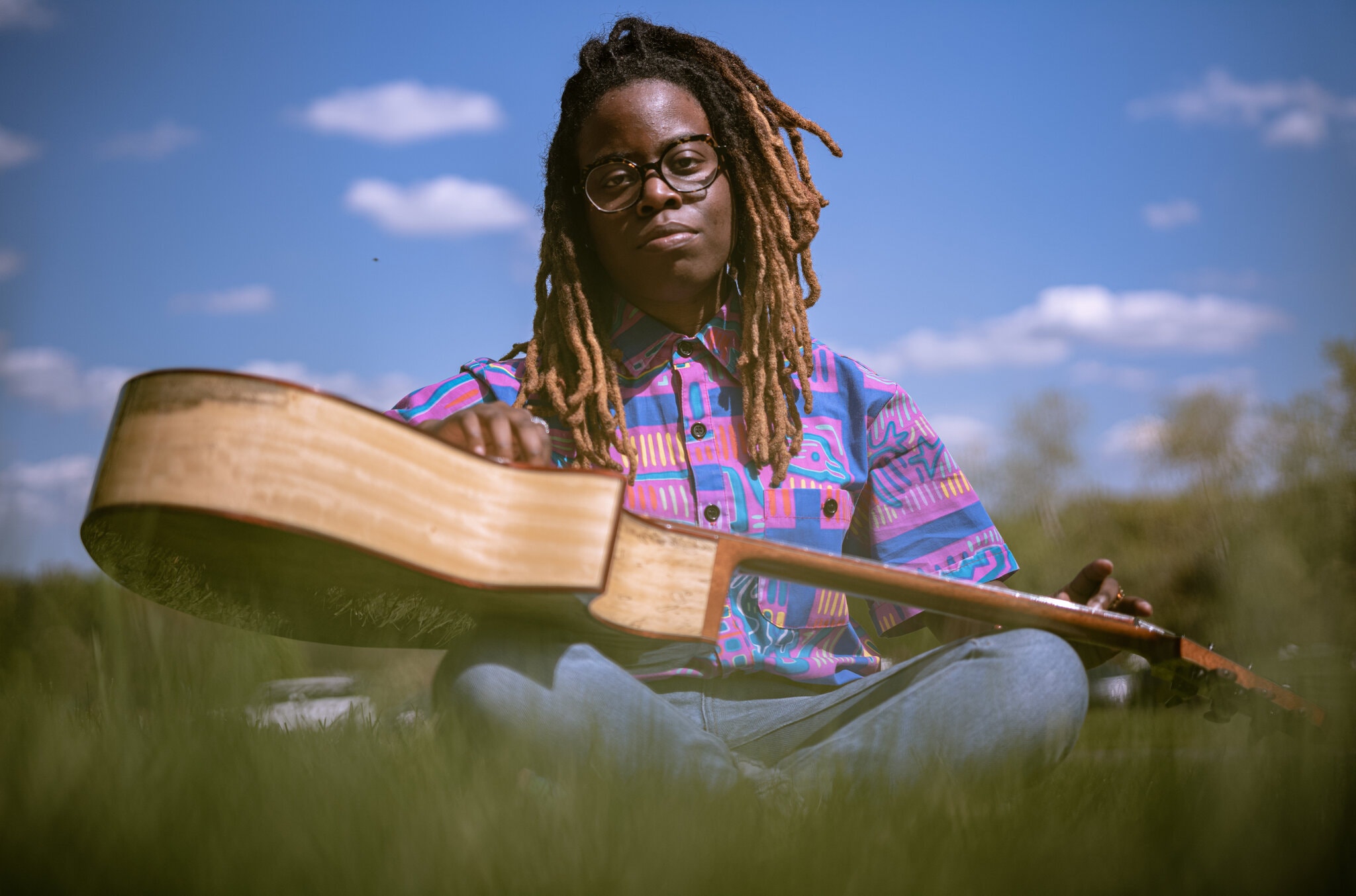 Williams’s parents purchased the game for her two older brothers, but the suburban D.C. family soon realized she was the household champion. “They would try to beat me,” Williams said on a recent afternoon in the sunroom of her grandmother Marsha’s home, near where she grew up. “But they couldn’t.”

More than competition, “Guitar Hero” represented a revelation for Williams. Though she was often the only Black student in her public-school classes, she didn’t know the Beatles, let alone heavy metal, existed before the game. She cut her teeth on her father’s vintage go-go tapes and her brothers’ hip-hop CDs. Williams loved the clarinet, but she wondered if she could make more exciting music if she had an ax like her onscreen idols.

“That guitar was the first thing I ever really begged for,” Williams said, and she received a red electric Epiphone SG. “Once I got it, I never played the game that much. The guitar took up all my time.”
More than a decade later, Williams, 25, is one of the country’s most imaginative young solo guitarists. Released in January, her second album, “Urban Driftwood,” represents a clear break with the form’s stoic, folk-rooted mores. On her grandmother’s porch, she laid a gleaming acoustic guitar across her jean shorts and hammered out rhythms with her wrist while picking iridescent melodies with her fingers. Wearing a collared cotton shirt and matching bow tie so bright they conjured an exploded dashiki, she reached for a West African kora and beamed. The notes from its 21 strings floated like bird song.

“Music should be enjoyable — at the end of the day, that’s what I really care about,” she said. “I want it to be something you can listen to, remember, hum.”

Williams’s radiant sound and adventitious origins have made her a key figure in a diverse dawn for the solo guitar. Long dominated by much-mythologized white men like John Fahey, the form’s demographic is slowly broadening to include those who have often been omitted, including women, nonbinary instrumentalists and people of color. These musicians are paying little mind to the traditional godheads. They are, instead, expanding the fundamental influences within solo guitar, incorporating idioms sometimes deemed verboten in what was once a homogenized scene.

These players are empowered by online access to fresh inspirations, compelled by current debates about equity and inclusivity and enabled by digital avenues of distribution that circumvent longtime gatekeepers. As this music moves beyond the realm of obscure collectors, its audience and attention have grown, prompted by the possibilities of players who sound as different as they look.

“It’s mostly young men who have been the market and the marketplace,” the Portland guitarist Marisa Anderson said recently. “But I am not going to spend my days focusing on masculinity and patriarchy. I am going to carry on, doing what I know how to do.”

This enclave is teeming with new faces and novel ideas. In the Southern Appalachians, Sarah Louise uses her 12-string to shape mystical paeans to salamanders, floods and frogs. In Brooklyn, Kaki King — for two decades, one of the few popular solo guitarists who wasn’t a man — taps and slaps strings to make music as ornate as a healing crystal. In Madrid, Conrado Isasa embeds his acoustic hymns within romantic electronic hazes.

Even avowed Fahey acolyte Gwenifer Raymond is compelled by the change. “My entire bloody career has been founded by dudes,” she said, guffawing in her apartment in England. “Representation matters — that’s just true. The music can only get more interesting.”

SINCE THE START of Fahey’s record label, Takoma, in 1959, the history of solo guitar has been astonishingly pale.

Fahey was the patriarch for a cadre of stylists — Robbie Basho, Leo Kottke, Sandy Bull — who assimilated the exotic-to-them styles of the Deep South, India and Africa into discursive instrumentals. Takoma released some albums by Black artists, and Fahey helped revive the careers of forgotten blues artists like Bukka White.

But his career often mirrored that of Elvis in its unabashed exploitation of music that Black and rural people made as a way of life. A child of the suburbs, Fahey attributed portions of his first album to Blind Joe Death, as though from the Delta himself. He spun tall tales about learning the blues from a Black man he christened with a racial slur. And he brandished the marketing tag American Primitive, suggesting the folk styles he lifted were compelling if not sophisticated. It is the “noble savage” of acoustic guitar.

Decades later, modern solo guitar labels often linger in such shadows. Since 2005, the label Tompkins Square has surveyed the landscape with an ongoing series of compilations titled “Imaginational Anthem”; released between 2005 and 2012, the first five volumes spotlighted less than 10 women or people of color despite featuring 60 players. (Recent editions have been decidedly more inclusive.) After almost three dozen titles, VDSQ has released just four titles not made by white men; the label’s owner Steve Lowenthal said that, after not receiving demos from women or people of color for half a decade, he’s finally getting them.

“I’m so used to white men, it’s like wallpaper,” Raymond said. “When you do encounter another woman playing guitar like this, you want to hang out.”

Before the modern music market existed, however, the guitar was far more inclusive. In 18th-century Europe, it was one of the few instruments deemed acceptable for women. In the United States near the end of the 19th century, the diminutive parlor guitar became a necessity for women entertaining guests. Born around then in North Carolina, Elizabeth Cotten — a Black woman who literally turned the guitar upside down — helped pioneer the slowly loping style that became Fahey’s calling card. A recent compendium in the globe-trotting series “The Secret Museum of Mankind” even juxtaposes century-old recordings from India, Italy, Greece and Ghana, reiterating how many traditions have shaped the guitar’s development.

Tashi Dorji, however, knew nothing about this pan-cultural pedigree. Raised in Bhutan, the small Himalayan nation landlocked by China and India, he understood the instrument as the domain of “endless English and American men,” like Eric Clapton and Eddie Van Halen. Those were the licks he started to learn on the nylon-string guitar his mother purchased from a Swiss expatriate.

After Dorji moved to North Carolina’s Blue Ridge Mountains in 2000 to attend college, he immersed himself in radical politics and bellicose metal. When he learned about free improvisation, he felt like he’d found an outlet for expressing these nascent ideals. He was stunned to discover, though, that an idiom rooted in rejecting conventions was dominated by people who resembled elected officials.

“I always saw music as this democratic, horizontal realm, but 99.9 percent of the guitarists I saw were white dudes,” Dorji said from his home outside of Asheville, where he lives in a mountainside cluster of artists and activists.

In his music, Dorji has found his rebellion; it grabs at melodic or rhythmic fragments only to grind them into dust. His 2020 debut for Drag City Records, “Stateless,” is a series of suites for improvised acoustic guitar that culminates with “Now,” a pair of frantic improvisations that steadily stabilize, as though Dorji has found his utopia. Released in September, it struck a clear chord during a season of upheaval, selling out of its first edition in less than a month.

“I wanted to use the guitar to interrogate structures of oppression,” Dorji said. “I forced myself to think of it as an act of radical, anarchic expression.”

Rachika Nayar also found herself clutching a guitar while surrounded by a sea of whiteness. Raised by two Penn State professors who moved to the United States from India, Nayar was “pretty isolated, the only brown kid in a small town.” When she was 11, she picked up the guitar and spent hours in her bedroom every day, practice taking the place of solitary hobbies like whittling and rock collecting.

She loved emo’s empathy and punk’s power, plus the “School of Rock” soundtrack. The imagination of jazz, though, spoke to her as a manifestation of oppressed individuality. She marveled at the way the self-taught guitarist Wes Montgomery used his thumb instead of a pick to create a distinct tone. “I realized how generative it is to lean into your idiosyncrasies,” Nayar said.

Nayar released her first album, “Our Hands Against the Dusk,” in March. She wrote many of its eight instrumentals by finding a guitar phrase she liked, electronically mutating it and pitting the warped sound against the original. It feels as though the instrument is searching for its essence.

When Nayar was a kid, the gadgetry to make such music might have been prohibitively expensive. Now, as a trans Indian American person, Nayar equates the ability to shape her music however she sees fit to her own self-discovery.

“It’s a feeling of something rising up inside of me,” she said. “That’s a moment queer people can relate to, when you realize you don’t have to live a certain way.”

For Anderson, the Portland musician, exploring the guitar mines a related sensation. She started learning classical guitar when she was 10, eventually gaining what she called an “athletic fluidity.” At 50, Anderson still loves practicing. But she didn’t release her solo debut until she was in her late 30s, so she’d abandoned any impulse to impress.

“There is a flash of recognition, and then it is gone,” Anderson said, explaining how an emotionally resonant moment of music might spawn a piece. “It feels like something locking into place, like a cog in a wheel. I’ll obsessively try to get back to that place, where that sound made almost religious sense.”

First reluctant to make records, Anderson realized that any label interested in her music would be small, with modest profits and demands. That would allow for “a healthy separation between my music and the marketplace,” she said, noting that her elliptical songs begin as private reflections.

“I am not hiding from myself when I am playing alone at home,” Anderson said. “What comes, comes.”

IN ENGLAND, RAYMOND does not shy from the impact Fahey had on her life.

As a kid in Wales, she started writing blues instrumentals after Nirvana led her to Lead Belly. When her guitar teacher handed her a Fahey LP, she felt validated. Released on Tompkins Square, her 2020 album, “Strange Lights Over Garth Mountain,” is one of the most bracing recent bits of Fahey reappraisal, his grace supercharged by her punk-rock past. “He is almost, by definition, my mean uncle figure,” Raymond said.

Raymond is also a video game programmer with a doctorate in astrophysics, so she is accustomed to fields dominated by men. But their historic grip on power is glacially loosening in all these realms, guitar included.

“The fear of traditional roles is disappearing,” she said. “This is one effect.”