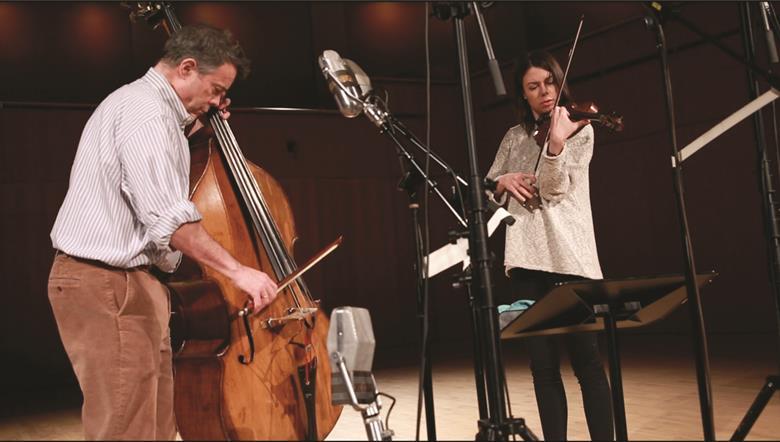 Diversity in our music takes many different forms.  Read on:

Violinist Tessa Lark’s new collaborative album, The Stradgrass Sessions, brings together the musical influences of her childhood, fusing bluegrass, folk, jazz and classical styles. The project might easily have been delayed by Covid-19, but her musical partners were only too happy to record remotely

The Stradgrass Sessions might seem unique to a classical eye, with its multi-genre programming of classical alongside bluegrass, folk and jazz, but that’s simply how I grew up with music. I was born and raised in Kentucky, and my father is a bluegrass banjo player, so although my primary training is classical, I played the mandolin before I ever played the violin. I was always learning different types of fiddle music and improvising. As a result, the artists I’ve collaborated with on this project come from the same ‘genre’ as I relate to that word. Jazz pianist, composer and vocalist Jon Batiste, bassist and composer Edgar Meyer, bluegrass fiddler Michael Cleveland and mandolinist Sierra Hull are all extremely different players, but equally, they are such soulful musicians who seem to operate from the same plain of excellence, naturalness and beauty of sound. The separate tracks were then recorded all over the place! This was partly due to the nature of the project, but also because Covid-19 showed up.

Jon Batiste was one of the people I called first. I’ve always been very drawn to his music making, and although I had never played with him before, we knew each other because he happened to be roommates at Juilliard with my fiancé, bass player and composer Michael Thurber – who is also the album’s co-producer. It was Michael who suggested that we improvise on the theme of My Old Kentucky Home, which has a lot of deep meaning for me – first, because Kentucky is where I grew up, and second, because of the work’s anti-slavery message. The majority of what ended up on the disc is from the very first moments we played together – Michael asked our engineer, co-producer Silas Brown, to turn on the mics as we were warming up, because he was guessing that the magical moments were going to happen right away, and sure enough they did. We hadn’t decided on anything in advance, and Jon came in with an energy, doodling around in the key of F major. So I thought, ‘You know what? That’s where he is, so that’s where I’ll go’. You’ll hear that Jon provides the majority of notes (as pianists always do!), while I mostly stay with the melody and embellish from there. It’s quite simple. I came to this straight from a Marlboro Chamber Music tour so my mind at that moment was in a more classical place.

Also on the album is Ysaÿe’s Sonata for Solo Violin no.5. Ysaÿe has always been one of my favourite composers. He was the teacher of Josef Gingold, who taught my own teacher Miriam Fried. I had the pleasure of playing Gingold’s Stradivari violin for four years, loaned to me by the International Violin Competition of Indianapolis after I was awarded second prize. This in turn made playing Ysaÿe still more meaningful and special because it was Gingold who premiered many, if not all, of Ysaÿe’s sonatas, and presumably on that very instrument. Now I have another wonderful violin to play (a G.P. Maggini from around 1600) but that special feeling hasn’t left me, and while the Fifth is perhaps one of the least popular of Ysaÿe’s sonatas, I find it so beautiful in its colours and imagination. It’s very clear, too, that it has a lot of folksy inspiration – the first movement is an amazing aural depiction of a sunrise, while the Danse rustique second movement sounds almost like a barn dance at times.

Recording it was a very different experience from recording with Jon Batiste, though, and not simply due to it being a solo track, but because by this point, we were in Covid-19-induced quarantine, meaning it had to be recorded in my New York apartment. This worried me at first because the room’s sound is not appealing, but thankfully Silas lives quite nearby so he let me borrow some of his microphones, and some quick mixes he sent back showed me that it’s amazing what can be done remotely. He added some beautiful reverb and made it sound much more expansive, which in turn helped psychologically, because I was able to understand as I was playing what the eventual sound would turn out to be. It was cathartic to imagine for a little while that I was in a larger space and not cooped up in my apartment! I suppose it’s similar to when you know that the sound you’re making on stage is different from how the crowd experiences it, so you’re playing in such a way that it sounds best to the audience and not necessarily to you.

Quarantine also coincided with recording with Sierra Hull, who was the only cold call on this disc. Sierra is a phenomenal roots player, and there’s also something about her confidence and consistency that’s struck me as similar to the aims of classical players. We thought she might be interested in playing nos.35, 39 and 43 from Bartók’s 44 Duos for Two Violins with me, as well as her own Chasin’ Skies, and she accepted right away. She doesn’t read music, so for the Bartók I recorded both parts separately for her to learn and memorise by ear. This, of course, is a very folksy way of learning music and demands that you really get it into your bones. It was beautiful to have that folk sentiment in this particular repertoire.

We then had to record our separate parts remotely. Usually when you record with somebody you’re affected by one another’s interpretation and energy, but when you record remotely that doesn’t happen. Instead, Sierra would send in her single track, and I would try to match perfectly her untainted interpretation, which I feel led me even further into her world. It gave me time to listen back and adjust my violinistic approach to her mandolin playing, so that I could play with more articulation – most obviously there’s a pizzicato movement that we played together, which meant figuring out how best to battle with a plucked instrument on my own bowed instrument. So, there were tons of silver linings to the situation.

Michael Cleveland’s Lazy Katie, meanwhile, is on the album as a result of a jamming session. Michael might be the one remaining true bluegrass fiddle-playing legend, and his more traditionalist approach resonates with me as a classical player – we’re both upholding these traditions as much as we can. He’s blind and also deaf in the ear closest to his violin, which means that his sound is very articulate, very clear, and pretty loud, too, so that he can hear himself. And he lays it down! He plays something once and even if it’s just on an iPhone it sounds like it’s ready for a Grammy award. He played Lazy Katie as we jammed one day in his house. I loved it so much that he figured out a harmony line, and it sounded so good that I asked him whether he would be up for recording it.

To briefly mention two other collaborations, Edgar Meyer has been one of the biggest musical influences of my life. His sound is so pure and poignant all the time, even in joyful music. We finally played together last May in Sydney, and he generously agreed to record the first and fourth movements of his Concert Duo for Violin and Bass with me. We also recorded STOMP by John Corigliano, a legendary living composer who was inspired by blues and bluegrass solo violin music, and wrote it down for classical players to be able to perform – so a no-brainer for this album.