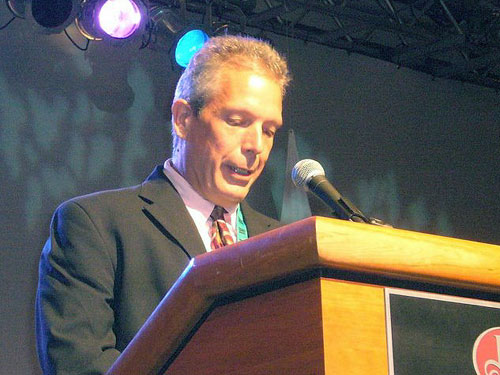 Photo: Mark Varner representing the CBA at the 2007 IBMA World of Bluegrass (https://cbaphotos.zenfolio.com)

Many thanks to Michael Hall of the Northern California Bluegrass Society for researching and helping pull together this Feature – Ed.

Mark Varner, the former editor of both the NCBS and CBA membership publications, died in his sleep on September 4 at his new retirement home in Belize. He was 64 years old.

The Everett, Washington native and longtime resident of Boulder Creek played mandolin and guitar with several active Bluegrass bands, including The Sibling Brothers. He performed frequently at the Good Old Fashioned Bluegrass Festival during its early years, and at many other area Bluegrass festivals and concerts.

He served on the Northern California Bluegrass Society Board of Directors and helped organize the GOF Festival, the Santa Cruz Bluegrass Fair, and other events.  When he was named editor, he added the pdf online version of the Society’s monthly Bluegrass by the Bay magazine — the first Bluegrass publication of any kind ever to do so.

Later, Mark took over the editorship of the California Bluegrass Association’s Bluegrass Breakdown newspaper from Zeke Griffin and incorporated the formatting and design features that Suzanne Dennison had established when the Breakdown received a Distinguished Achievement Award in 2007 from the IBMA on behalf of the CBA.

In addition to his role as editor of the CBA Bluegrass Breakdown, Mark served on the CBA board, was a member of the Talent Acquisition Group (which recruited the Father’s Day Festival stage acts), and he organized the first printed program for the CBA Father’s Day Bluegrass Festival.  His job lasted over a decade until the onset of the Coronavirus pandemic, when the Breakdown format was changed from a newspaper to a volunteer-run newsletter.

Throughout his many years as a Bluegrass musician, organizer, and editor, Mark maintained an engineering consulting practice designing and evaluating the air fluid systems in scuba equipment. He was a graduate of San Francisco State University.

CBA Board Chair Pete Ludé:  “Mark was particularly noted for his Dad-duties:  Many people (including me) got to know Mark well through Marty and Veronica, especially Marty’s jaw-dropping flatpicking skills at age 12.  It was clear that Mark was a patriarch of musical passion in the family with wonderful results.  He left a deep legacy.”

Bluegrass musician and photographer Snap Jackson shared this recollection on Facebook:  “Man…our Bluegrass family lost a huge member with the passing of our friend, Mark Scott Varner. I was lucky to call Mark a friend for well over a decade. He was funny, energetic, hardworking, and super supportive of our band and our music. We got to have many conversations when he and I worked together as photographer and editor for the Bluegrass Breakdown. He did a lot for the California Bluegrass community and cared deeply for this close knit scene. He will be greatly missed and forever appreciated. My condolences to Marty Varner and Veronica Varner and all who knew and loved him. Peace be with you, my friend.”

Mark’s son, Marty, writes “Mark Varner passed away in his sleep on September 4th. He was a loving father, husband, and friend. He will be missed by many and I, along with others, will always cherish the memories we have of him. His time in Belize was pleasant, and his last days were spent with his family. May you all cherish your loved ones while they are still here. With love, Marty Varner”

After he retired from the CBA, Mark moved to Belize, where he purchased a home and property in Dangriga. His time in Belize was spent with family. However, his plan to invite his Bluegrass friends down for a tropical festival sadly did not come to pass.