#5 – The Feud Between Bill Monroe and Flatt and Scruggs 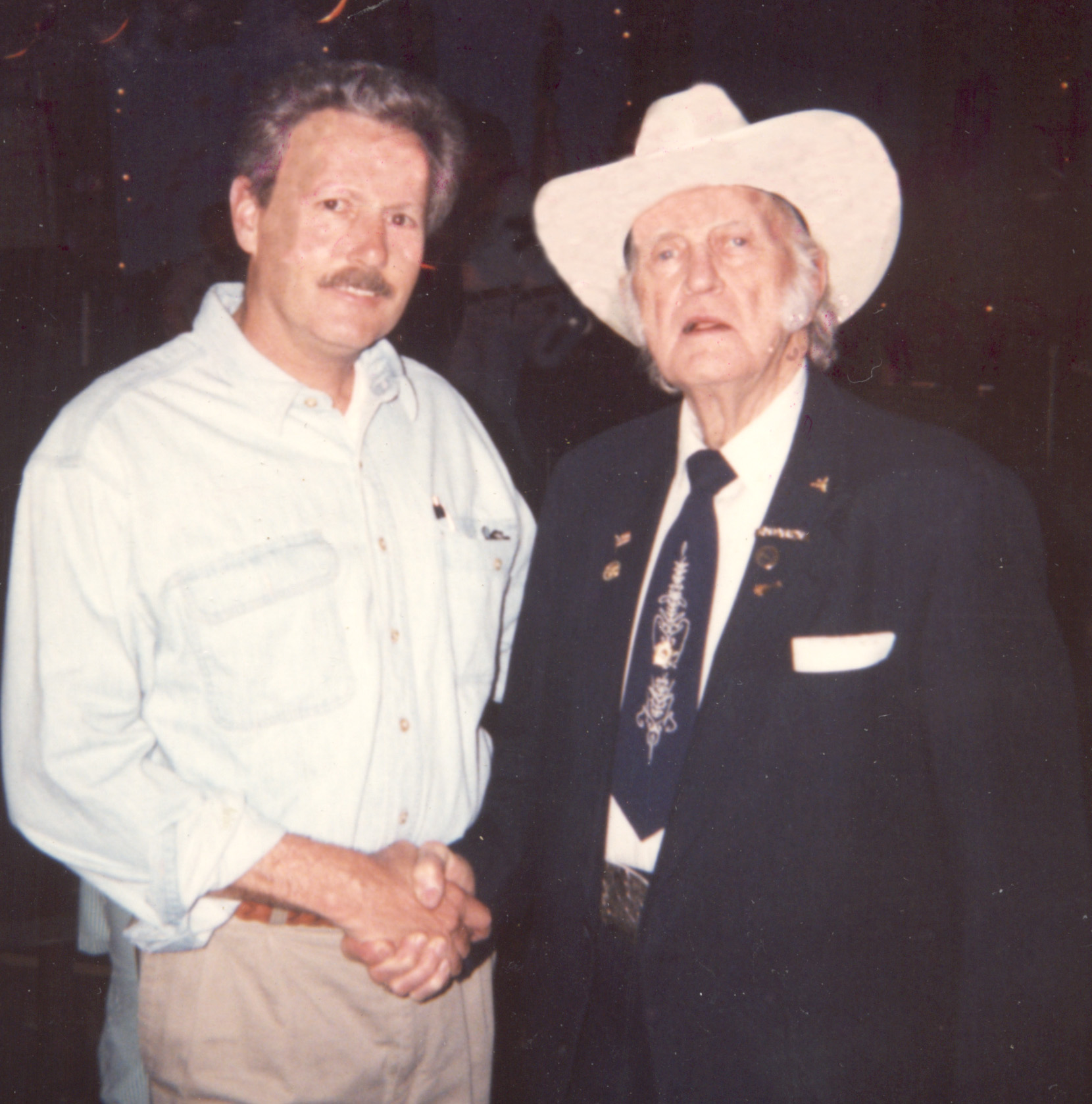 This is  #5 in an ongoing  series of blogs by Barry Willis, who has generously allowed the CBA to publish.  You can find other blogs by Barry and info on his fascinating life here.

There have been many discussions about what we might call “The Feud.” A general summary of this might be to tell you that when Lester Flatt and Earl Scruggs left Bill Monroe’s Blue Grass Boys band in 1948, they didn’t speak for over two decades. Call it jealousy or hate or resentment or whatever, it did exist.

This month we’ll discuss various aspects of this bluegrass history controversy. Hang on; we may step on some toes.

In 1955, Flatt and Scruggs became permanent members of the Grand Ole Opry. Until that time, they were only guests. Josh Graves (who joined Flatt and Scruggs and the Foggy Mountain Boys about 1955) told this writer of Bill Monroe’s attempts to keep Lester Flatt and Earl Scruggs off the Opry, “When they worked together [in the Blue Grass Boys] they were the best of friends and were a great band. As far as I’m concerned, that was bluegrass! When Lester and Earl went out on their own, there was some jealousy there and they didn’t speak for twenty-two years.

“Bill was that way,” continued Mr. Graves. “I knew him before that and when I came in with Flatt and Scruggs, Bill wouldn’t speak to me. But the boys in [Monroe’s] band talked [to me]. They didn’t want us to but we did. People like me and James Monroe and Joe Stuart talked a lot and that’s how Flatt was booked at Bean Blossom (which was Monroe’s festival in Brown County, Indiana). I’d go tell Lester good things Bill had said about him, and James [Monroe] would tell Bill the same things about Lester. So in ‘71 or ‘72, when Lester was asking about the June schedule, I told him we were going to Bean Blossom. He said, ‘You’ve got to be kidding!’ So when we got there, Bill came backstage, grabbed me and said, ‘How’s my boy?’ Then [he] turned around and shook hands with Lester and welcomed him to Bean Blossom

“Bill was on stage and said that folks wanted them to sing some songs together and Lester looked over at him and said, ‘Can you still cut it?’ I remember that. And when they hit the stage with those songs, I don’t think there was a dry eye out there.” (This last quotation is from a 1980 article in Bluegrass Unlimited magazine by Dr. Charles Wolfe.)

Dobroist and International Bluegrass Music Association Hall of Fame inductee Josh Graves told this writer that when Flatt and Scruggs split, Josh continued with the more traditional sound of Lester Flatt and the Nashville Grass. However, according to Graves, the reason for him choosing one band over the other was not because of a musical preference (certainly the men’s groups were very different), Graves said, “Hell no! I just wanted to make a living.” He loved both men and found it difficult to choose one over the other.

Earl Scruggs and Bill Monroe also made up while Graves was with Flatt’s Nashville Grass band. Scruggs and his Earl Scruggs Revue performed at Bean Blossom to show off his new band which included Graves. Interestingly, Flatt wouldn’t speak to Graves for the two years that Graves was with the Revue. Graves described the reason for leaving Flatt, “Well, we got to where we couldn’t get along. And there was a lot of controversy in the group and I just got tired of hearing it.” (This quotation by Josh Graves was made to this writer at his home in November 1994.)

IBMA Hall of Fame member Curly Seckler would not elaborate on this feud to this writer but did tell this me that while Flatt and Scruggs’ popularity was at its peak, Bill Monroe couldn’t even keep a band together. Seckler described how popular the band of Flatt and Scruggs and the Foggy Mountain Boys was, “Lord, you couldn’t carry the mail that they was gettin’ home in that bus hardly. They were just stackin’ ‘em in!”

It has been said by some that when Monroe heard that Flatt and Scruggs was coming to Nashville, he said the only way they would look right in Nashville was on the street with a cup. It seems like “the upstarts,” as they were called, had made it  to the big time in Nashville too. Seckler added, “In my opinion, when he thinks that there ain’t no room out here for the rest of us, I don’t believe the good Lord would put a man here on earth if he didn’t have something for him to do. There’s room out there for everybody, I don’t care who they are. Look at the thousands out there now makin’ a livin’ at it (bluegrass). He felt like that—that we weren’t entitled to the Opry—but he’d better thank his good Lord every time he passes Sparta, Tennessee, get down on his knees and kiss Lester Flatt’s grave—in my opinion! ‘Cause if it hadn’t been for us, I don’t believe he would be where he is today. That’s my honest opinion!”

Mr. Seckler emphasized that he was in the Foggy Mountain Boys band when that band got into the college circuit and “made the thing go.” Monroe is well known for not being a businessman, said Mr. Seckler, but Lester and Earl viewed their music as a business—with a very tough manager, Louise Scruggs, to run it. According to Seckler, “We worked! We worked seven days a week, year in and year out. In my opinion, they’re the ones who put it on the map.”

Lance LeRoy, who was a bluegrass band booking agent and member of the IBMA Hall of Fame, in a 1996 letter to this writer, told of a time when Bill Monroe tried to keep Flatt and Scruggs from the Opry. ”The fact is that in 1953 when Bill Monroe heard that Martha White Mills wanted Lester Flatt and Earl Scruggs to be members of the Grand Ole Opry and to host the regular Martha White time slot, Monroe, motivated only by pure jealousy and spite, apparently fought it bitterly with Opry management. He even circulated a petition backstage at the Opry for the other members to sign, stating that whoever signed it was opposed to Lester and Earl being made members of the cast. He succeeded in keeping them off for more than a year.

“Of course, any good journalist would ask at this juncture, ‘Do you have proof?’” LeRoy continued, ‘I do indeed, and the strongest kind of proof. One night backstage at the Opry while it was still held in the Ryman Auditorium, Roy Acuff  came in Lester’s dressing room, one of the small rooms that were barely large enough to hold a five-piece band. It was in 1970 or 1971 and I think, possibly the latter. Roy began reminiscing with Lester and I stood there and heard Acuff  relate an incident whereby Bill Monroe brought the petition to him. Acuff  said he read it and it specified that Monroe’s music belonged to him and that Lester and Earl should not be brought in to compete with him. Acuff said he signed it but very soon began to realize that the music belonged to Lester and Earl as much as to Monroe. He thereupon looked Monroe up, retrieved the petition, and made Monroe scratch his name off. He said he felt that Lester and Earl would be a credit to the Opry and had every right to be there. Acuff  added that Ernest Tubb refused to sign it when it was presented to him by Monroe.

“I would like very much for you to quote me on this in your book and I stand behind every word of it. And proudly, The truth should be told. Hastily. late at night… Best Wishes.” It was signed Lance LeRoy.

Mr. Carlton Haney (also a member of the IBMA Hall of Fame) was there at the backstage of the Opry when he witnessed the feud. As you might know, Mr. Haney was Bill Monroe’s band manager for several years. He told this writer Monroe “had a disagreement with the Opry people about puttin’ Flatt and Scruggs on the Opry playin’ what he felt was his music…to say that Martha White Flour contacted WSM about puttin’ Flatt and Scruggs on the Opry to do their show. They were one of WSM’s biggest advertisers. And Monroe opposed this. And there was some talk with other artists and all about it. But Flatt and Scruggs added a pioneer Dobro player who turned out to be one of the greatest: Josh “Buck” Graves. And it changed their sound so much; it was so different from what Monroe was still playin’ that Monroe stopped his opposition to them comin’ on. And that’s about the way it was!

“Now if you want to put what Lance said about Acuff, that’s fine. But see, Acuff ain’t here to defend hisself and neither is Monroe. You can mention this because everybody in the music business knows that Monroe was opposed to them goin’ on the Opry. Some of them know that it was because they changed their sound with a Dobro and never did use the mandolin. You see, there’s no mandolin breaks on any of their records and they never took any on the Opry. But that wasn’t in the deal; there was no deal made that they had to do that. They did that because they didn’t want to sound like Monroe. They didn’t want to.”

Next month we’ll have another excursion into another controversy in the world of bluegrass music.