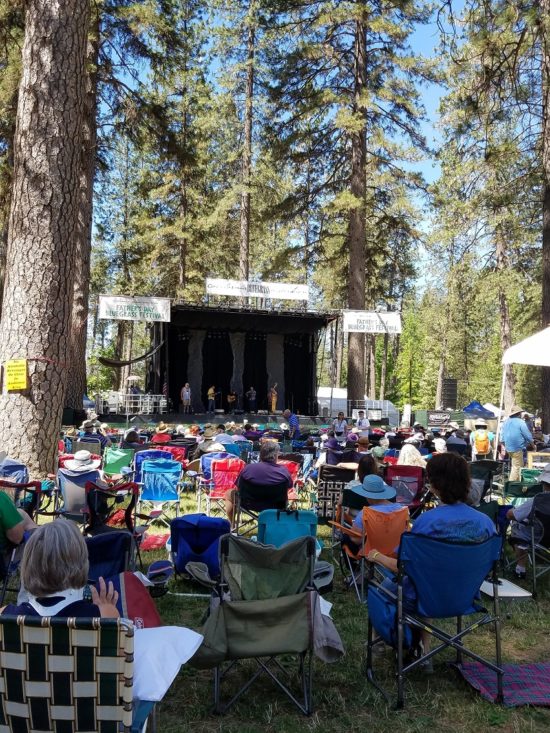 It was night time at Grass Valley. Everyone with any sense had gone to bed long ago but even now, at three in the morning, you could hear a few murmurings. The stage area was especially quiet. Only a few hours before, this very stage had pulsed with energy and it seemed that the forces which produced all that energy slumbered all the more soundly because of it.

The pickers on stage must have been too tired to remember to put away their instruments. There they sat, abandoned on the stage. Some were propped up against a chair and some were in their instrument stands but they were all there.

Grass Valley is a pretty safe place in June and things like tools and instruments don’t need to be watched all that closely. Still, it’s just not a good idea to leave instruments lying around and the instruments left onstage this early morning were particularly nice ones that any music fan would covet.

The instruments took notice as a solitary figure approached the stage. She was dressed in a long flowing gown and her braided hair was tied with a laurel wreath. Not the usual gal you see at Grass Valley but she had a regal demeanor and was obviously not intent on thievery. Our visitor took a seat onstage and sat for a moment listening to the sounds of late night jam sessions. Then she spoke out loud, as if to noone in particular: “Who among you can tell me what the most important bluegrass instrument is?

“Who’s askin’?” It was Banjo. He was a bit of a loud mouth and when he talked, others sometimes had trouble being heard above the racket. It was no surprise that he had spoken first.

The beautiful visitor answered calmly. “I am the bluegrass muse and I have come from Mount Olympus to find an answer to my question.”

A different instrument spoke: “Oh, I’ve read about you. Your name is Euterpe, right?.”

“No, Violin. My name is Maggie and I am the bluegrass muse. Euterpe is my mother. She and Aunt Polymnia were born ages ago but I was born in Nashville a mere eighty years ago. Of course, I was in my mother’s womb for quite a long time before that”.

“You sure don’t look that old, kid. Aren’t you the one they call the Blue Eyed Darlin’?”

“Why thank you Guitar, and yes, a lot of people do call me that. But let me return to my question. I must have an answer and I will reward the one who answers correctly with a guided tour of Olympus”.

“It’s ME of course”. (It was the loudmouth again).

“Before we continue, Banjo, I have to tell you and the other instruments that you don’t have to vote for yourself. I only wish to know the most important bluegrass instrument and even if it isn’t you, if you answer correctly, you will win the prize”.

“I hear Mount Olympus is a swell place for a vacation”, said Bass. She was a modest gal and already thinking about whether or not to cast her vote for Guitar. She had always admired Guitar and made a habit of watching his fretting for guidance with chord changes on less familiar tunes.

“Oh, I can assure everyone that Olympus is beyond your wildest dreams, not that Grass Valley is such a bad place. But tell me Banjo, would you like to change your answer?”

“Why should I? Bluegrass would be nothing without those three finger rolls that Earl made famous. Don’t tell me that every bluegrass fan doesn’t listen for me above all the others. It’s MY fast as a machine gun rolls that really make bluegrass sound like bluegrass. Banjo pickers MADE bluegrass: Earl Scruggs, Ralph Stanley, Don Reno, Bill Keith, Pete Wernick, Jens Kruger…, I could go on and on but do I really need to? Everyone knows I’m the most important. I’m the star of stars and it’s as simple as that!”

“I must say Banjo, you sound pretty confident and state your case well. But do any of you have another opinion?”

“I do. Fiddles are at the heart of every music they play. We always carry the tune with its most sublime sweetness. No other instrument can match us. Our Uncle Pen showed ‘em how it’s done”.

“Listen to you”. It was Mandolin. “You think you’re so fine and cultured showin’ off how you knew Maggie’s mom’s name from Greek mythology. Big deal. Maggie doesn’t need to feed your ego by calling you violin. You’re just a fiddle and that’s all you’ll ever be. I’M the primo instrument in all of bluegrass. Bill himself picked ME because I drive the rhythm with my backbeat chop. And what would bluegrass be without all those bluesy slides that Bill made famous? So many mando monsters, so little time. I can top Banjo’s list of names…”

Guitar interrupted: “Oh, quit your twanging’. You’re nothing but an undersized guitar trying to be a violin”. Guitar really knew how to put Mandolin in his place when he got on his high horse. Mostly the instruments got along really well. They were good friends but somehow Maggie’s query had brought out their competitive natures and the conversation was starting to get out of hand. Guitar continued: “I’m the real star here. And I’m the star of everything from folk to rock to rhythm and blues AND bluegrass. I’m the G run. I’m the bridges that connect all of your solos and I’m the sweetest chords you ever heard. C’mon, let’s go see Olympus. I hear it’s really nice this time of year.”

“I’m sorry, Guitar I can’t take you because you didn’t answer my question correctly. In fact, we have no winner as of yet.” Maggie smiled enigmatically and looked at Bass.

“Me? Well at least someone finally appreciates how I am the glue that holds all these prima donnas together! Talk about rhythm, I’ll give you rhythm! I’ll vibrate you right through your breastbone and back up through your spine. Everyone feels the energy of MY rhythm and that’s what gives bluegrass its soul.”

“I’m sorry, Bass but I’m afraid you don’t know the answer either. I’m so disappointed. I was sure one of you would know.”

“You call yourself the bluegrass muse but you don’t know the first thing about bluegrass,” screamed Banjo. “You’ve heard from every one of us and besides the fact that the answer is ME, how could we all be wrong? Tell me that! I demand to know!”

“Because there IS one more bluegrass instrument. And I’M the most important!” It was Dobro. Nobody had noticed him in the background. He had been waiting patiently and now he felt that his time had come because, though sometimes overlooked, he had the same self confidence as the other instruments even though he hadn’t been at it quite as long.

“Oh, there you are Dobro. I didn’t see you back there but your answer is as wrong as all the others. There are other instruments that belong in the bluegrass mix. Maybe some, like piano or drums, are shunned by purists. But Sally Ann’s accordion filled in for Howdy’s fiddle when he went to fight in Korea and it was still bluegrass. You six take yourself so seriously but good pickers can hold their own in a bluegrass jam with just about any axe they choose. But none of the many instruments that claim a place in the bluegrass pantheon hold a candle to the most important bluegrass instrument”.

She stood and pointed to a distant campground. “Do you hear those people jamming? Listen to how the merriment is magnified every time someone starts singing! Listen to those harmonies. Hear that laughter as they delight in that exquisite vocal blending. If you could watch that jam we hear in the distance, you might observe how some of the otherwise shy so called ‘grinners’ are actually joining in the chorus! Some of them may not even know how to play an instrument. But they are still able to make good bluegrass music That’s because they are able to do what just about anybody can. They can play the most sublime bluegrass instrument of all, the human voice.“

The instruments bowed their heads and acknowledged what was obvious. Their job was mostly to make singers sound their best. Oh sure, they enjoyed their solos and other times when they took the limelight but they knew that bluegrass was rooted in good singing most of all. They were all humbled.

Maggie noticed their downcast mood and felt bad about it. She had tricked them perhaps. “Hey you guys! Let’s all go to Olympus anyway. I am so tired of Orpheus and his lyre. Maybe you guys can show them up there what bluegrass can really sound like! Do we have a singer?”