A Season of Firsts

This spring has been a season of firsts. I like first because I get bored easily. That which is novel in my life today becomes banal the next. This should not be construed as a pejorative statement on the many projects and activities I’ve been involved with over the many years. If anything, it’s an unabashed confession about my embarrassingly short attention span. I can completely relate to how trout are caught on ugly, non-natural looking, sparkling lures. They are attracted to flashy things and they bite. It’s instinctive. My eighth grade students figured out how dangling, jingly bracelet, or an abrupt, wide smile will throw me off my rails. One either embraces this characteristic or struggles mightily against it, in vain, his entire life. My arms are embraced around a short attention span. That’s why I love firsts.

A big first occurred just this Friday night. It was a first in a couple of ways. Annie, my daughter, had her first solo gig at the Queen Bean in Modesto—a coffee house with a wonderful deck that serves as a stage for many quality, local bands. She was opening for another act and was determined to go out there with nothing but her voice and guitar. She has always had the security blanket of a backing band or me on guitar. Boy, was I a nervous dad. It’s hard letting go.

A couple of days before, I let her try the guitar that is my prize possession in life: a vintage Levin that had been my grandfather’s. He gave it to me when he figured I played well enough to deserve it. That ol’ flat top has traveled all over the western hemisphere with me. She and her brother had always been admonished that the guitar was worth more than their lives. It’s perhaps the only thing in the house they never got into without permission. Friday evening she went on stage with her great-grandpa’s guitar and sang her heart out. That guitar looked at home in her arms and never sounded so sweet. By the end of her set, I knew that the Levin was no longer mine. It was the first heirloom that I’ve ever given away and my soul is satisfied.

Another first is putting together a group of musicians in an effort to sound something better than a glorified jam. I can’t attest to whether we’re any good yet or not, but one thing is for sure: all you musicians that have taken that next step in musical evolution beyond the jam have my endearing respect. Trying to get calendars to match, musical styles to mesh, and improve my own musicianship have made me rethink the whole ”It would be so cool to have a band” thing. We sat down in front of a microphone today to record a practice CD. It was also a good evaluative tool for our playing. It’s hard to turn off the critical ear and enjoy one’s own music. It’s difficult to say whether the recording experience built my confidence and or made me worry more. This band thing is, however, a first for me and I love the challenge. It’s a shame that the day job has to get in the way of picking and practice, but I’m not the first to have ever thought that.

T.S. Elliot wrote, “April is the cruelest month.” I’ve enjoyed the challenges of March, and April an only be better as we kick off another new musical season with the Spring Campout in Turlock. To my way of thinking, the new year really begins in spring when the earth reawakens from winter slumber, and new hope is born in our hearts. This year is already promising to be one of “firsts.” 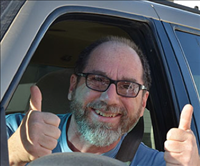