A State of Music 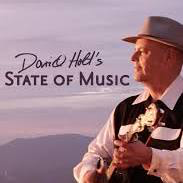 Not so long ago most people found out about the music that was making a stir by turning on the television set. My generation just had to watch the Beetles live on the Ed Sullivan Show. Before that there was Elvis Presley and after that Michael Jackson. So simple. Plop down on your couch, turn on the groove tube and be entertained. The Grand Old Opry was on TV. Flatt & Scruggs had a regular show, lots of stuff.

I was born in North Carolina so I grew up listening to a lot of the good music CBA members are so fond of. Growing up I heard great bluegrass, old time and gospel music just about everywhere. You could watch the Grand Old Opry, Flatt & Scruggs or the Wilburn Brothers on their regular TV shows.

Finding that kind of music on TV is more challenging these days but it can be done. Maybe it’s easier back in Carolina but as I write this I am watching and listening to Rhiannon Giddens play and sing a song she wrote called Julie. She holds her fiddle bow very far up but plays well and what a voice!

The show I’m watching is David Holt’s State of Music. I watch it on KRCB, a local public radio station. I’m very happy this program is on the air. It’s about all I can get related to the music I love despite hundreds of satellite channels. In years past I had other good shows I could watch.

The host of the TV show I’m watching is David Holt. He played with Doc Watson for fourteen years and can play just about anything.He started the show on clawhammer banjo and graduated to the mouth bow (similar to the Jew’s harp). He plays the washboard really well. Maybe we should have a contest between David and Dom Flemons, who wowed us at Grass Valley last month, and see who can play the most instruments.

The show is almost over. It was a live concert. Balsam Range has done a fantastic set and now they are singing an a cappella number. In between we had some awesome black gospel by Wilma Tharpe. Thanks to David for giving us generous portions of all the important musical food groups.

North Carolina is home to lots of great musicians. David’s show has featured many bands I would love to see at our Grass Valley Father’s Day festival some day. In the meantime I’m glad that I can tune into live bands on TV while I prepare my next visit to a bluegrass campout or festival.

KCSM in San Mateo used to air a very good show called Song of the Mountains. It was broadcast from the Lincoln Theater in Marion, Virginia with host Tim White. Marion is a town of fewer than 7,000 inhabitants but for more than a dozen years the producers of the show have somehow managed to attract major stars to perform live for a nationally syndicated PBS audience. Doyle Lawson, Tom T Hall, Doc Watson, Rhonda Vincent…(just to name a few) have all played in this little town at the Lincoln Theater.

Tim White, the host of the show, is an artist and he recently painted an 80 foot mural celebrating Song Of The Mountains and the history of bluegrass in Marion on the side of the retail outlet for Virginia Sweetwater Distillery, the state’s first legal moonshine manufacturer. It is located across the street from the Lincoln Theater.
Depicted are White, the Lincoln, local music legends Wayne Henderson, Carson Cooper, Bill Harrell, Cousin Zeke Leonard, and Hobart Smith, plus several iconic images relating to old time and bluegrass music in the area.

Sadly KCSM has since gone to an all jazz format. But if you can find a station with Song of the Mountains it’s worth a listen. Fortunately a lot of these great shows have been archived and you can stream recorded versions on your device of choice. Perhaps it’s not the same experience of tuning into a live broadcast but it’s still good.

I’m hooked. One of my bluegrass friends told me about RFD TV, which has a lot of great old country and bluegrass shows running. Unfortunately it is not part of my standard cable package and I’m not the type to pay extra. But David Holt’s State of Music has been on my TV every week for free and I never realized it for a long time. You can be sure I’ll be listening every chance I get.