A Story to Tell

I frequently hear people going on and on about the pre-war Martin or the Loar or take your pick of old instruments and how much better they sound than modern productions. Sometimes they are right, but in many instances, a good quality modern instrument will sound as good or better than an old one. Just because it is old does not mean it will necessarily sound good or vice versa. However, there are some old instruments that will always sound better to me, but that has little to do with the vintage or name of the instrument. It has to do with history of the instrument. Sure there is the famous Tony Rice Martin once owned by Clarence White; there are all the vintage instruments played by the legends of yesteryears available at ridiculous prices because of their previous owners. These historic instruments are nice, but lets face it, they are not really going to make you play better unless they make you engage in proper, regular practice (yes, I don’t practice as much as I would like either). So, any instrument of your choice can fulfill that goal. The instruments I am referring to fit in the same category, but there is just something special about them. I am talking about instruments that have been passed down over the generations or those that are discovered as hidden treasures when clearing out an old attic or under a bed. Sometimes they appear in pieces in an old box and are not really passed down as much as discovered by subsequent generations. Yes, these are the historic instruments that I find to have true meaning.

I feel so strongly about this that I have started referring routine repairs and luthier work to music shops in the area because I find that building custom instruments and repairing instruments with meaning much more fulfilling. There are always exceptions, but they are just that. So I cleared my shop of routine repair work to focus on building unique instruments and restoring instruments with meaning. A tour of the repair work in my shop today reveals a 1951 Martin D-28 that got run over by a baggage car in 1998. The owner originally purchased the instrument new and said it cost him two month’s pay, about $350. The instrument is in bad shape after being run over and then sitting for all this time. It really is more of a disassembly, repair or replace, and reassembly vice a repair. However, this is the instrument he originally learned to play and he is determined to hear sing once again. Even after informing him that I could build him a brand new custom dreadnaught for much cheaper, he decided that he preferred the restoration. The instrument has a history, a story to tell, and the owner shares those stories frequently at weekly jams. However, the guitar wants to tell its own story for generations to come. The case for this Martin still has the baggage tag from American Airlines on the handle and I suspect that it will remain there as an artifact for evidence. I am certain it will sing again and while it will never reach the dollar value of other Martins of the same vintage, for the owner and his family it will always be priceless.

Similarly, I have a Tater-bug Mandolin with a piece of the headstock broken off, a couple of cracks in the top, some broken back strips, and heavy wear. The owner doesn’t play but says the instrument came over from Italy with his great great grandfather. He handed it to me with the pieces wrapped in brown paper in a brown paper shopping bag. He tells the stories of how when he was a kid that he and his brothers used to play with the mandolin and that he may be the likely culprit that caused a lot of the damage (but of course he leans towards the other kids deserving the blame). After retrieving it from a closet at his uncle’s house, he decided that he wanted to learn to play the instrument of his ancestors. However, just any mandolin would not do. He wanted his fingers to follow the same frets as his great great grandfather as he thought about the trials he surely faced. The decision to leave home, the voyage across the Atlantic, and integrating into a new world are all small portions of the story this mandolin has to tell. The instrument itself has no label or serial number and is not particularly ornate. Most people would look at it, classify it as junk, and likely throw it away. At best, it would be a wall decoration somewhere, but even that would require some repair work first. However, for the owner there is a sentimental connection to the past and to his family tree. He says he often reads about immigrants making the long voyage to America and thinks of his own family playing this mandolin. I am sure that he will always find joy as he learns to play this instrument of his forefathers. There will always be a special sound produced, even if it is only discernable by those who know the history.

After all, it is these instruments that were carried across the ocean from various locations that provided the foundation and created the conditions necessary for bluegrass music. Today it is difficult to think about a day when this instrument combination did not exist. However, the fiddles from Ireland, the guitars from Spain, the mandolins from Italy, and banjos from Africa all met each other for the very first time in the bottleneck of Appalachia. Each instrument bringing its own sound and each player bringing their own influence to this new brand of music that was only made possible by the convergence of peoples and cultures in the “New World”. Soon there were common arrangements of tunes and adjustments to traditional lyrics from these small groups of musicians that commonly became known as “Billy Bands” that came down from the hills (thus Hillbilly Music, but that is a different subject that may be explored more in the future).  The point is these instruments all came with their own story and when joined together and passed down through the generations, it became the story of bluegrass music.

Yes, I understand that many folks don’t particularly care for history. That is probably because they never had a really good history teacher. If you were fortunate enough to have a teacher explain to you at some point that history is nothing more than “His Story” and actually taught it that way rather than requiring students to memorize a bunch of meaningless, random dates, chances are you enjoy it more than most. However, what better way to tell “His Story” than through the sounds of an instrument that was once played by your ancestors? (Even if it is your musical ancestors vice biological; OK, so those high dollar vintage instruments could be classified as musical ancestors…sort of, but it is not quite the same.) An instrument with a story to tell, even if it is not that old, but just so happens to be the instrument you initially learned to play, has the potential to tell your story and its story for generations to come. There will always be something special about these instruments that provides fulfillment beyond anything contained in the name and date on the label, if it has one. One’s desire to tell the story eloquently might provide the motivation for that practice mentioned earlier or for attending the next jam.  It could provide the motivation for future generations to learn to play music. The possibilities are endless.  So call me crazy, but you can keep your pre-war Martin. Unless it is the guitar your grandfather played, I would much prefer the no name, no label variety that my great uncle Floyd learned “Old Joe Clarke” on. Of course, nothing wrong with both, but if I had to choose, it would be Uncle Floyd’s. 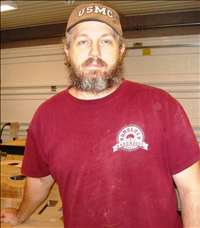