Editor’s Note–So, where does time go? Seriously, is there some cloud-based vault that each of us, at least once in our life, has dimly suspected…hoped really…was an eternal safe house where every moment of every eon was stored and catalogued and kept in pristine condition JUST FOR THE RECORD. No, I’m not talking about memories; sure, memories are great as far as they go, but they’re really just re-creations and hence subject to flux and utterly unreliable. I’m talking about the real goods, complete in every way, unabridged, unedited TIME. Like, for example, the actual, honest-to-God, unchanged and unadulterated word-for-word Welcome columns from the past decade.

On January 15th, 2007, I received an email from a guy named Bob Schwartz. Didn’t know him, had never even heard the name. Was I, CBA member #9407 asked, interested in using a little piece he’d written for a guest Welcome column? I read the attached story, wrote back an enthusiastic “yes” and three days later, on the 18th, Afternoon Delight ran on the CBA web site. Nine years ago. Where does time go? Really, where does it go?  RC)

So this is how it starts: with a simple, deceiving phone call to my wife. I told her I’d be in an afternoon meeting and would be unreachable the rest of the day. I hoped that I sounded convincing. The truth was I had arranged — by email — a secret rendezvous with someone I’d never met. We had agreed to meet that day, in a nondescript location near the airport at 4 p.m. I needed to leave my downtown office, get to our destination, take care of “business,” and return home to my family by dinnertime so that no one would be the wiser. Could I really pull it off?

I left my office around 3. I was excited — I was, after all, on my way to what I hoped would be the first of many encounters with a tall, slender beauty, but I also knew that such pleasures don’t come cheaply. The email said she was Asian — I hoped we’d be able to communicate with each other, and that my clumsy American style would nonetheless strike a responsive chord. I boarded the BART train and watched the stations go by one by one as the train hurtled toward the airport. Finally, the train arrived. I grabbed a cab to our meeting place, hoping that this object of my desire and I would hit it off.

I entered the room and wasn’t disappointed. She was beautiful. I admired her for a few moments, and then ran my hands lovingly along her neck. She let out a soft, low sound. I put my arms around her waist and traced the contours of her curves. Her foreignness was alluring; she was much younger than I, but I’m hardly the first man to succumb to the allure of a fresh beauty. We spent some time getting acquainted (in a manner of speaking), and I was smitten — I hoped that this curvaceous beauty would have a place in my life for a long time to come.

The hour grew late. I got back on BART and headed home. I spent the hour-long train ride knowing that I couldn’t keep what had happened that afternoon secret for very long. I was going to have to explain this to my wife, and I fretted about how she would react. Gail is an understanding woman, but a secret Friday afternoon rendezvous? This would take some doing.

I got home and began my confession. I told my wife that I hadn’t really been at a meeting that afternoon. She looked at me with a worried look on her face — just what had I done, she wondered. I explained that if she would just come outside, she would realize where I’d been. We walked outside together and there was the Asian beauty on our porch, displaying her classic curvature for us to admire.

My wife shrieked with delight. She had been wanting a new bass for awhile, and she loved the new Chinese bass I had just brought home on BART. She thanked me profusely for going to Steve Swan’s shop in Millbrae and picking it out for her. I told her that she deserved it — she is and always will be the love of my life, and it was time for her to upgrade from the used starter model that we’d made do with for the past year. It had indeed been a delightful afternoon, and the three of us — Gail and I and the Asian beauty — went back inside to make some beautiful music together. 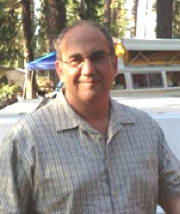