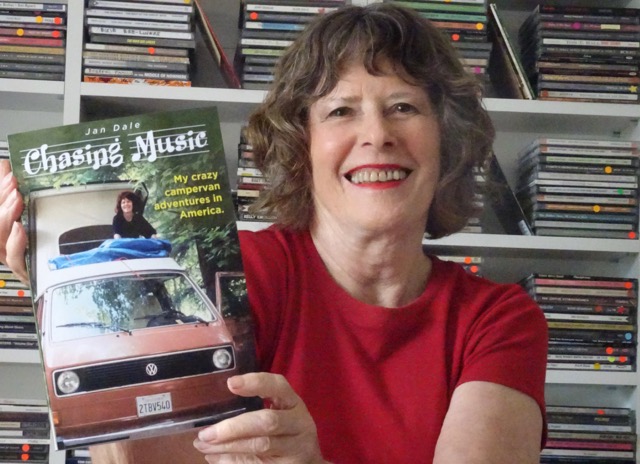 JAN DALE WRITES: I am an Australian Bluegrass radio presenter and an old friend of Carl Pagter who I met along with many other CBA members in the wonderful performance and hospitality suites you always had at IBMA. The first I attended was at Owensboro in 1992 or 1993 when I was driving myself around America on a tight budget and in an extremely unreliable camper van in which I slept in the hotel parking lot!
Over about six years I travelled 160,000 miles through 48 states, saw spectacular scenery, got struck by lightning at the Grand Canyon, met wonderful (sometimes eccentric) people, found amazing music and visited a a lot of Volkswagen mechanics!  Every year I went to IBMA and my favourite part was always the CBA suite. There I could listen to the most wonderful music played by top musicians in a small room where no amplification was necessary.  Often I was sitting within a few feet of the band.
The other reason I loved the CBA suites was because I sometimes felt lonely travelling solo for such a long time and I always knew that I would see welcoming faces there.  As well as Carl I especially remember Frank Solivan. Sr., who was usually in charge of maintaining order – trying to keep visitors quiet when the bands were playing etc.  I found him a bit scarey at first and would never have dreamed of sitting on his chair which was clearly marked ‘Frank’s chair’ but became quite fond of him when I got to know him a little bit.
I became hooked on Bluegrass and went to many festivals but, sadly, never managed one in California.  All this eventually led to my radio show, Southern Style, which I started about 24 years ago.  In 2019 I was thrilled to be the first DJ broadcasting outside of America to be nominated for IBMA’s Broadcaster of the Year.
My most exciting news, though, is that I have just published a book – Chasing Music, My Crazy Campervan Adventures in America – in which I trace these journeys.  Of course CBA gets a mention. 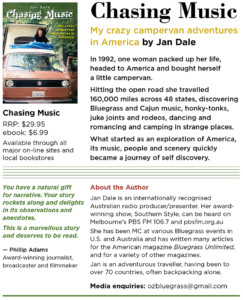