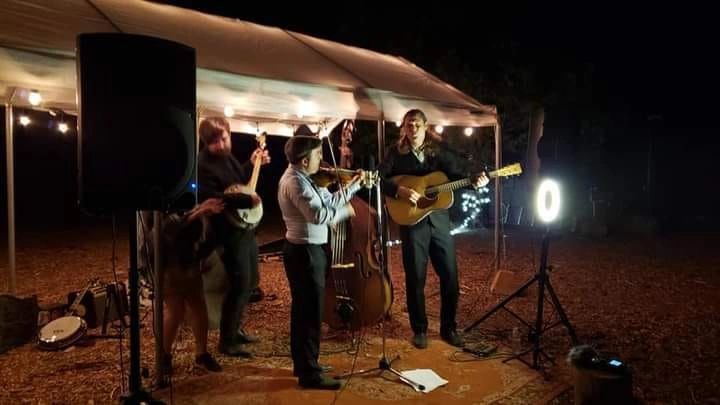 Up in the mountains, among the pines, two of Southern California’s favorite bluegrass bands got to play for an audience of local Wrightwood folks, and loyal fans who were willing to drive up the mountain. Many who made the trek were pleased to find it wasn’t a hard drive, and the venue was extraordinarily beautiful. But the music itself was the real reward.

The first show featured The Honey Buckets, and if you think you’ve heard or seen them before, but haven’t heard them lately, you have not heard the Honey Buckets! They were a good band before, they are a great band now. The addition of Forest Thurman on guitar was definitely part of the magic, factor in some intense practice during the pandemic, or maybe it’s the hair? They all seem to have quarantine hair and beards, but don’t expect a hippie sound! These guys play traditional bluegrass, fast and tight, with three part harmonies that will make you swoon. The foursome is made up of Mike Stern on banjo, Devin Wilcox on mandolin, Brian Dragonman on bass, and of course Forest Thurman on guitar. They all sing and they all do it well. I’ve since learned that these guys live close together and get to practice several times a week. It shows. See them. Any chance you get!

Water Tower played the second show on August 14 and their dedicated fans known as “Tower Heads” and “Owls” were everywhere.  Kenny Feinstein flat-picked the hell out of that guitar, Tommy Drinkard showed why he is a first-place banjo winner, and the newest member 20 year old Jessie Eads tore it up on the upright bass and covered harmonies while regular bassist Joey “Juice” Bergland was out of town. They came armed to please with the addition of friend Korey Simeone who blazed on fiddle all night long!

Of course, you can expect extraordinary musicianship from all of these guys, but what always takes me back a bit it the warmth they manage to exude while kicking ass on their instruments. It’s no wonder they have such a loyal fan base which includes nine fan pages ranging from “Drinkards Hair” to “Tower Ladies” There is never a moment of pretention or separation when they play, and Kenny Feinstein knows how to banter with an audience that makes you feel like he’s your bestie by the end of the show. If IBMA ever decides to add “nicest guy” as one of their categories, Kenny is a heavy contender.

Folks danced, ate, watched great music under the stars, and some even got to join in the picking after the show. We all hope this venue decides to host shows in the future, as it was a beautiful setting for mountain music. We all could use more fantastic live bluegrass and feeling of community it brings.