We’re getting ready to leave for the Parkfield Bluegrass Festival later on today, packing all the necessary items….including dog food and bowls, pet bed, chew toys, and a few extra doggy biscuits. Thankfully, the Parkfield festival allows pets, so we’re spared the expense of boarding our pup or the need to impose on friends to take care of him while we’re away.

Every year as festival season approaches, the Fathers Day Festival’s “no dogs” controversy rears its head anew. This usually includes some folks broaching the subject (presumably tongue-in-cheek) about bringing non-traditional pets to the festival. While common sense seems to preclude bringing undomesticated animals and barnyard critters to Grass Valley, those animals, as well as more traditional pets, have long received their due in the lyrics of bluegrass songs.

We’ve all heard “Pig in a Pen” “Cluck Old Hen” and several mule songs including “Mule Skinner Blues”, “Whoa Mule”, and “Kickin’ Mule”. More recent additions to the bluegrass barnyard include Ron Thomasson’s “Saalo’s Song”; Anyone who heard Ron’s emotion-filled delivery of this sentimental tribute to his beloved steed several years ago at Grass Valley bore witness to the undeniable bond between man and beast.

Birds are acknowledged in the Stanley Brothers’ “Little Birdie”, as well as other traditional songs such as “This Little Sparrow” (aka “Come All Ye Fair and Tender Ladies”), “The First Whippoorwill”, and “The Cuckoo”. Other denizens of the wild are recognized in songs like “Ole Slew Foot”, “Crawdad”, “Groundhog”, and “Fox on the Run”.

Animals play a role in bluegrass gospel tunes, too: “Pale Horse and His Rider”, “Washed in the Blood of the Lamb”, and “White Dove”, to name a few.

As a bona fide Crazy Cat Lady, I’ll admit my disappointment that cats seem to have been largely overlooked in bluegrass lyrics. This is a mystery to me; With all the mention of cabins and country living in bluegrass songs, there must have been cats running around the old home place or snoozing on the porches of those cabins. Yet the only “bluegrass” cat song I could locate is from a Doc Watson recording entitled “Sing Song Kitty”:
“Way down yonder and not far off
Sing song kitty kitchee cry me oh
Jaybird died with a whoopin’ cough
Sing song kitty kitchee cry me oh”
In other words, it has nothing to do with cats…

Of course, Man’s Best Friend plays a prominent role in bluegrass songs like “Old Rattler”, “Little Old Log Cabin in the Lane” (with the line “The only friend that’s left here Is that good old dog of mine”), the heartbreaking “Echo Mountain” popularized by James King, and Jimmy-Martin’s homage to his hunting dog, “Pete the Best Coon Dog in the State of Tennessee”. Admittedly, some references to dogs in bluegrass songs are euphemisms for something else and have little or nothing to do with our canine friends. (“Chattanooga Dog”, “Dog House Blues”, and the bawdy “Salty Dog”.)

If you’re heading to Parkfield, with or without Fido in tow, I wish you a safe trip and hope to see you there. If you’re staying home, why not give your winged or four-legged companions an extra pat on the head? Bluegrass music just wouldn’t be the same without them.
< 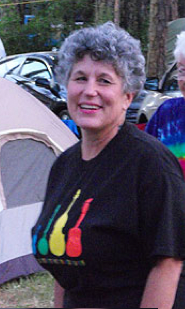