“Is the jamming any good?” “Will I have to hike out for food?” “What kind of a bluegrass festival is it anyway?” “What’s the volunteering like?” Ah, yes, friends, these are the great unknowns of an untried festival venue. So, here’s a take on a recent festival experience based on my patented and highly scientific rating system of 0 to 5-PICKS.

If you ever experience a lull in bluegrass festival-land after June, make tracks to the Bowers Mansion Festival put on by the Northern Nevada Bluegrass Association. Next year, if you start getting any crazy ideas, like, taking a vacation from work that does NOT involve bluegrass, think again. Here’s a one-day festival sandwiched by two days of jamming and extra-curricular activities that delivers in a big way. I think a better descriptor might help, something like Jam-tival, Festi-Jam, Jam-Fest-Jam-tival. Orrrrr maybe not. Whatever, the important stuff is covered: Good music. Good food. Good folks.

VISIONARY VOLUNTEERING: Got there early Friday morning and immediately joined the crew to assemble the amoeba-like hoard of easy-up canopies, assorted festival paraphernalia, and stage. Because it might be closer to being retro in this age of Swiss-Army-Knife stages that fold out of trailers with hydraulics and remote controls, this stage doesn’t have all those fancy bells and whistles. Instead, it’s the real deal, good ol’ fashioned, sturdy wood and steel, with some bolts, a shade net, and plastic trellises thrown in. Solid, roomy, well-shaded, and the stuff where dreams are delivered.

The NNBA spoils us volunteers for sure, and keeps everyone happy and smiling for the whole festival. Rafts of donuts in the morning, crossiant samiches for lunch. It’s a good thing that the stage is already mostly bolted in place, because we all bail when somebody mentions sandwiches. Plenty of food, beverages, and a cool festival tee shirt to boot. 5-PICKS

FASCINATING FOOD: Award winning, go-back-for-seconds, lip-smackin’ Gordon’s Backyard BBQ has some of the best pulled pork ever, and that might be part of why there are at least fifteen people in line at all times! Pitmaster Gordon provides a satisfying selection of taste-bud snapping barbecue, along with a creative twist or two, like Pulled Pork Garlic Fries, and a BBQ Sundae. Heck yeah, just the stuff to revive the spirit after an all-nite jam. 5-PICKS

CREATIVE CAMPING: Davis Creek Campground in the northeastern Sierra. Beautiful, rustic, splattered with Jeffrey Pines, and just a mile or so down the road from the festival venue. The NNBA takes over and thoroughly Bluegrassifies a group camp area. Dry camping only here, but there’s plenty of space, it’s away from road noise, and nobody cares if we jam all night. Yet. 4-PICKS

Run Boy Run. Winners of the Telluride Band Contest, this group delivers a great set, complete with kick-you-to-the-curb solos, haunting harmonies, and a mix of original and traditional tunes. Not too shy to bow the bass, or flaunt the cello either, which adds a hay wagon-full of depth to their music. Classic bluegrass with some folk and old-time thrown in, presented with a unique, original style. Whether setting the stage aglow with “Wayside/Back in Time”, or captivating the audience with their soulful rendition of “Ain’t no Ash Will Burn”, this band is a must-see! I had their three-part harmony in my head for days afterward.

The Central Valley Boys. Always the crowd favorites, these dazzling day-glow dandies, denizens of the legendary Bakersfield sound, kick out surprises in every set. It was a treat to see the effervescent Pete Hicks (fiddler, vocalist, multi instrumentalist, luthier, and renaissance rambler), as an inspired addition to the Boys lineup. This makes the CVBs a crazy lazy susan of talent, with absolutely something for everybody at every turn. Side note: some fans practice “Boy-erism” where they make bets on which color suit the Boys will wear for their performances. Honest.

The Note-Ables. They flat out steal the show. Whether mesmerizing us with a clever arrangement of “Ring of Fire” or getting the crowd signing along with a stellar version of “Wagon Wheel”, this group obliterates the division between performer and audience. No dry eyes in the the crowd after “I’ll Fly Away” either. This band is made up of students with disabilities from the Note-Able Music Therapy Services who were game to pull together a kickin’ bluegrass set on short notice. These folks have a thing or two to teach us about getting off the rail and following your bliss.

Emcee Dave Gooding (The Central Valley Boys). Dave gets 5-PICKS in his own category because of his professionally playful, trickster, easy-going vibe. He keeps the audience connected and the festival flowing.

JOVIAL JAMMING: Basically something for everybody here. Amphitheater open mic-style jam and performance, then campground jamming on Friday. Saturday evening there’s all night jamming, bonfires, and happy campers scampering about from jam to jam. Sunday finds us, um, oh yeah, jamming, with a gospel radio-show event at the amphitheater. Okay, to be fair, the jamming here is a little off-road, especially when accessing the amphitheater, but yeah, the jamming rocks at this festival. 4-PICKS 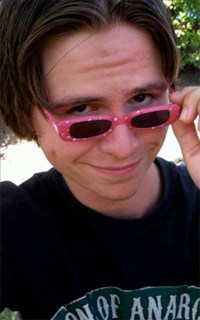