My son Marty and I attended the main day of the NCBS’s Bluegrass On Broadway Festival last Saturday. It was a nice event, in its second year. We saw lots of friends there. The event featured some fine local bands like Nell Robinson and Redline, winners of the Plymouth Band competition last year, and Belle Monroe and Her Brewglass Boys. They even let me get up there and play some bass with Jayme Kelly Curtis and the And Friends Band.

The event was free and sponsored by local businesses. There was not a huge turn out, but enough to make for a fun day. I’m sure the local restaurants saw and up tick in customers. I will put in a personal plug for Amelia’s Ecuadorian restaurant, which has the best pupusa’s you’ll ever wrap a lip around. Mmmmmmmm.

I would say a high point of the day was the sound. Dave, sorry I didn’t get the last name, was prefect. Great job.

And the winners are:

Al Knoth is best known as the host of the long-running “Cuzin’ Al’s Bluegrass Show” on various radio stations in the Monterey Bay and San Francisco Bay areas beginning in the 1970s. He currently appears on KPIG radio in Freedom (Watsonville), CA., a broadcast that is also transmitted in other areas of California and is a popular live web broadcast for listeners around the world. He is also a regular host on KKUP’s Monday Night Bluegrass rotation in the South Bay. Before the formal organization of the Santa Cruz Bluegrass Society, Al organized bluegrass concerts, festivals and other events in the South Bay and Central Coast areas through his radio program on KTAO in Los Gatos, thus gathering together a group of fans who later became the SCBS.

Glenn Christensen and Karen Quick joined forces to create a formal non-profit organization that focused on support for bluegrass in the South Bay and Santa Cruz area. The SCBS launched a regular monthly jam in DeLavega Park in Santa Cruz, then added the Bluegrass By The Bay newsletter, weekend campouts, and a regular concert series featuring local and touring bands. Karen and Glenn served as key early leaders of the new venture, which soon energized bluegrass life in the San Francisco Bay and Monterey Bay regions.

Glenn’s longtime dream to live by the Hawaiian shore led him to arrange a job transfer from the Santa Cruz post office to one on the island of Oahu. He has since retired and now lives a few hundred feet from the beach in the tiny Windward Shore town of Hauula. Karen is best known to bluegrass fans as a mainstay of the pioneering female bluegrass band Sidesaddle which she helped found in 1979. Karen has since retired from the band, but still lives with her husband, bluegrass musician Mark McCornack, in their home in the Santa Cruz Mountains. 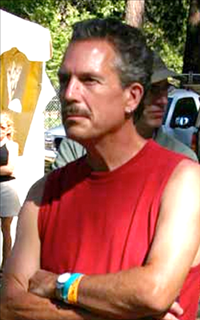