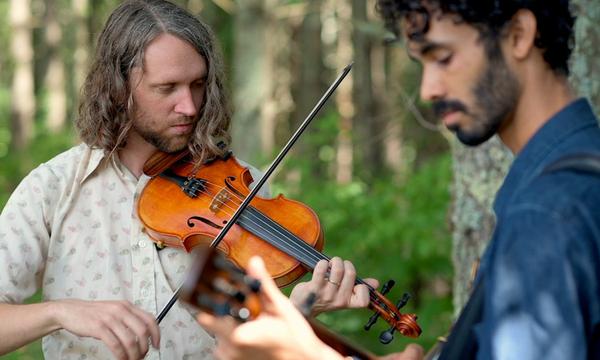 George Jackson is an accomplished, Nashville-based fiddle player who tours as a band leader and fiddler for hire, working with artists such as Front Country, Peter Rowan, Missy Raines and many more. Born in New Zealand, George grew up in a musical family and first heard bluegrass music around the age of 14, immediately falling in love with the style he started trying to work out how to play it from recordings and from the few mentors he could find in New Zealand. Moving to Australia as a 16-year-old, he won the Australian National Bluegrass Championship on fiddle three times and toured the country with his bluegrass band, “The Company”, playing many major folk festivals on the Australian circuit. Since 2016 George has been a resident of Nashville, TN and the USA.

I first listened to George play fiddle at the International Bluegrass Music Association’s Conference in 2018 when he performed in the Fiddle Suite that The Violin Shop and The Fiddle Mercantile teams up to host.  At that time he was showcasing material to be included on his upcoming 2019 album Time and Place, and an original tune called “Cabin on the Cumberland” really caught my attention.  I was amazed at his fluidity up and down the neck, the way he approached melodies, and his very danceable groove that seems to float right on top of whatever ensemble he is performing with.

That night sold me on his fiddling and songwriting, and since then I’ve anxiously awaited what would come next.  Well, on October 29 we got it!  Hair & Hide is a new album of fiddle and banjo duets featuring 7 different banjo players, 7 George Jackson originals and 7 traditional tunes.  I recently caught up with George about this new album:

Thanks for taking time to answer a few questions about your new album Hair & Hide, which features 14 fiddle and banjo duets! Was this album idea conceived before the pandemic, or is it something that is a byproduct of the pandemic?

I conceived of the album before the pandemic, but it turned out to be a good project to work on during that time, being that there were only ever two performers in the studio at one time, keeping potential exposures to a minimum. I actually recorded the first two sessions with Brad Kolodner and Jake Blount in February of 2020, just before it all came crashing down out east here, and then was able to continue recording the sessions later in the year at intervals. So, I got lucky in the sense that it was a project that felt possible to complete during the pandemic, but as far as the concept went I really started getting that together in 2019, I felt like it was a great way to bring together both the bluegrass and old-time elements I’m interested in, to give me an opportunity to work with a bunch of musicians I love, and a challenge for my playing in a stripped back setting.

How did you have to change your playing to fit a duet as opposed to the full band that you used on “Time and Place”? What did you find you enjoyed or maybe didn’t enjoy?

Duo playing is quite tough! There’s a lot of space to fill and you’re always in the spotlight either out front as a soloist or as the only backing musician holding things together for someone else. So this project helped me work on timing, groove, dynamics and thinking about how to creatively back up others. Arrangements are also big in a duet setting, because you have to be creative to keep things interesting for 3 plus minutes! I enjoyed that challenge a lot! I absolutely love your tune writing. Your melodies are very lyrical, as is your playing, and I always find myself humming tunes you’ve written. What is your approach to tune writing and perfecting?

Thanks so much for the compliment Brandon! I love writing fiddle tunes, I feel like the pursuit of perfecting a two or three part fiddle tune that people enjoy is like a musical equivalent of a short form of poetry or something. It’s easy sometimes to get carried away, or make things difficult and it can be a little bit of a trap to make things that only you can pull off, but it can be hard and challenging to write tunes that keep things simple while capturing a scene or feeling. I try to keep things accessible for other musicians and hopefully not too much like an existing tune or a musical cliche. So I’d say my approach is to try fulfill that brief I just outlined, which is something along the lines of; simple, accessible, insightful, interesting but not cliche. Often that involves a process of trying to strip back or simplify some musical ideas I have, trying to know when I’m trying to be too clever or tricky all while trying to make melodies that are new and trying to be clever with musical ideas in a accessible or understated way.

Very cool! Turtle Rock is one of mine, I wrote that one specifically with Uma Peters playing in mind, I was trying to write something groovy and modal for her to play on gourd banjo. I’m really happy with how that one came out, it’s played in GDAD tuning on the fiddle, which was a good way for me to get out of my regular finger patterns and come up with a new melody, as well as finding some interesting double stops. Three Shoes was brought to the table by Jake Blount, it’s a Judy Hyman tune that the Horse Flies played, so it has that great trancy vibe. I hadn’t done a lot of listening to the Horse Flies before this project so I love that Jake brought this one to me, it’s really changed my approach to a lot of things since.

How did you go about choosing the traditional tunes that you put on this album?

The idea was to play one of my tunes with each of the seven banjo players on the album, and then have one tune that either they bring to the table or that we mutually agree upon to record. That came about in different ways with different musicians, some people brought me something that was really representative of their playing, in one case that was one of their own compositions, in some cases it was a discussion between us about something we’d enjoy playing together. So all the tunes that aren’t mine on the record are a result of that specific collaboration with that banjo player.

Hair & Hide is a very clever title, and appeals to my instrument/bow geekiness. What fiddle(s) and bow(s) did you use on this album?

I actually came up with Hair & Hide as a joke title first, but my wife and friends who I was with at the time convinced me it was actually a good idea, so I came around to it and now I like it! I used just my four-string fiddle made in Australia by Lance Scott in 2008 and a CodaBow Diamond carbon fiber bow on the whole thing. What mic(s) did you use on your fiddle? Do you use a two mic setup?

I had to ask my sound engineer Sean Sullivan about this actually because I just trust him with this stuff, and don’t really have much of an opinion as long as he’s in charge! He used just the one Neumann KM84 on my fiddle overhead on all the tracks.

This album is sonically very consistent.  Did you record everyone at the same location or in different rooms?  Was it live?

All the tracks are live with me and the banjoist in one room together. But we used three different studios around Nashville due to Sean’s regular studio space closing down during 2020. So we started out in the Butcher Shoppe for three of the sessions, then we were at the Cowboy Arms for three and sessions and the last session was at the Tractor Shed which is a studio out of Grandpa Jones’ old tractor shed in Goodlettsville. I’m glad you mentioned consistency in the sounds, I’d put that down to Sean’s ear and expertise in recording and mixing the album. Do you have a good story or memory about the making of this album?

So many good memories! One thing that’s kind of cool is that the tunes with BB were possibly the last tunes to be recorded at the legendary “Butcher Shoppe” recording studio in Nashville that was owned by John Prine. Unfortunately during 2020 that place became a new condo building in Germantown, but we might have gotten that last word (or pluck) in there, a place where many a legendary album went down. Other notable memories or anecdotes include Uma Peters saying about 3 words the whole time we were in the studio, which was very funny to me, she was only 13 and she’s quite reserved, and she barely said anything, but of course she played up a storm!

What can we look forward to next from you?

I’ve got some ideas about where to go next as a band leader… I’ve started playing some regular gigs around town here in Nashville with my friends Frank Evans on banjo and Eli Broxham on Bass, and I’ve been daydreaming about a trio recording with them that explores some more trancy, jammy and effect pedals with fiddle tunes, that could be fun! But I also have a couple of other projects that are recorded and will be out next year that are more collaborative efforts with some friends, so keep an eye out for those!