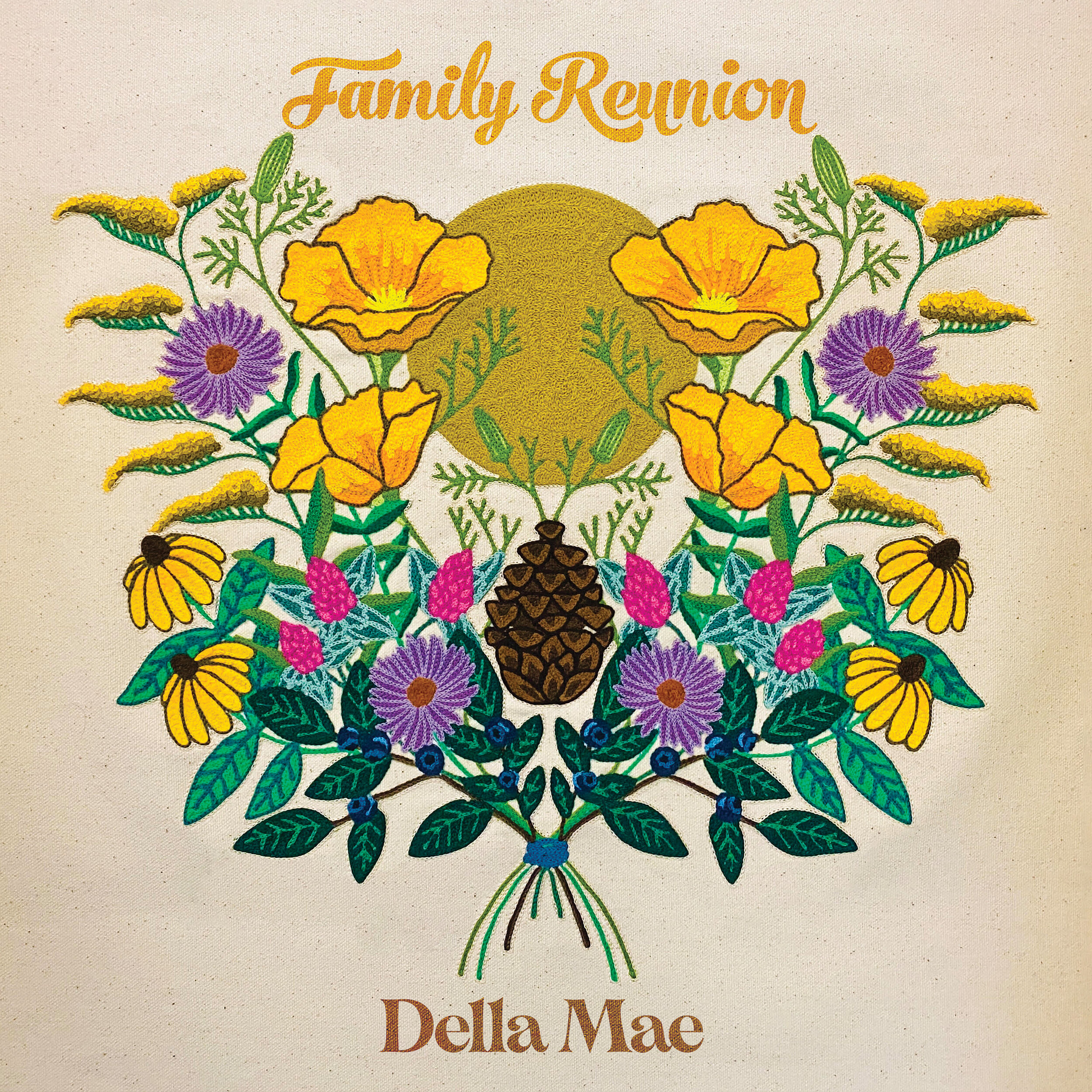 Song List:  These Songs, You Don’t Have To Do That, Ride Away, Goodbye My Friend/Waltz for Lois, The Way It Was Before, Dry Town, Heart of My Home, A Few Old Memories, The End.

Della Mae has been attracting attention since they first formed in 2009.  The group has combined top instrumental skills that are rooted in bluegrass with song lyrics that illuminate the changing role of women and the collective quest for equality and change in today’s world.   Kimber Ludiker has been a leader with the Kids in Bluegrass project with the California Bluegrass Association, and has been a performer at the Father’s Day Festival in Grass Valley with Della Mae.  Celia Woodsmith, the stellar lead vocalist and songwriter has focused on the strength of women to overcome obstacles and continue the quest for equality and fairness in all phases of life.  Her tribute to working women in “Boston Town,” and the search for fulfillment in “Sweet Verona” continue on the songs in this collection.  The new lineup now includes Kimber on fiddle, Celia on guitar, Avril Smith on guitar and vocals, Maddie Witler on mandolin and banjo, and Vickie Vaughn on bass and vocals.  The band was not playing in person during the long pandemic, but their instrumental and vocals blend seamlessly and their musical reunion shows that the musical magic is as strong as ever.

“These Songs” celebrates the before times where the band traveled all over and “turned the covers down from town to town,” while “The Way It Was Before” acknowledges the hard working folks who kept the country going and the injustices that they endured that won’t be fixed with “wishing and hoping.”  Maddie and Kimber propel the song with a traditional blend of mandolin and fiddle.  “Heart of My Home” begins with a bluesy tone and horns and pedal steel to celebrate home, hearth, and fresh baked bread.

The band also adds instrumental solos to John Hartford’s “You Don’t Have To Do That” with a reminder that women don’t have to get all those “jams, jellies, and preserves” to look beautiful.  Della Mae is ready to meet and greet y’all again!

Grascals: Up All Night

Song List: Sleepy Little Town, Thankful, Up All Night, Sleep All Day, Where My Darlin’ Waits For Me, Low Down Blues, It’s A String Thing, You Put Me First, Remember Where You’re Going, This Ol’ Train, Maybelle, Flowers and Lace, Traveling the Highway Home.

The Grascals have been awarded the IBMA Entertainer of the Year honors three times, and their banjo player Kristin Scott Benson has won the Banjo Player of the Year multiple times.  Since their formation over 15 years ago, the band has had a wonderful blend of strong vocal trios, contemporary song selection, and an instrumental sound that features strong solos that flow easily through the songs.  That instrumental prowess is demonstrated in mandolin player Danny Roberts’ original instrumental, “It’s String Time.”  Each instrumental solo brings the instrument’s full tonal range and nuances of volume to showcase the player and the melody.  Bass player Terry Smith and guitarists Chris Davis and John Bryan form a strong vocal trio with carefully blended harmonies and heartfelt lead vocals.  Completing the band are Adam Haynes on fiddle, Kristen on banjo, and Danny on mandolin.

The classic, “Travelin’ the Highway Home,” has a full bluegrass chop and rhythm vibe going with Chris’ lead vocal followed by a vocal trio and a full set of instrumental solos.  “Sleepy Little Town” captures the lure of the old rural life contrasted with the city life “with the rats winning the race,” and the singer nostalgic for the old fishing lake and the joys of watching childhood baseball games.  “Up All Night, Sleep All Day” is a joyous celebration of a night out on the town, while Kristen’s clawhammer banjo underscores the story of “Maybelle” whose siren’s call is so tempting, while “Low Down Blues” has a bluesy instrumental track that matches a soulful vocal.   “Flowers and Lace” is a gentle love song remembering a lost love that will bring tears to your eyes.  The Grascals always find a treasure trove of songs to present and like Forest Gump’s box of chocolates, there’s always a flavor to tempt and savor!

Balsam Range takes its name from a mountain range that connects the Great Smoky Mountains and the Blue Ridge Mountains near the band’s Haywood, North Carolina home base.  The band has a potent blend of instrumental prowess, great and powerful lead vocalists, and a selection of songs that ring with contemporary themes.  Band members are Buddy Melton on fiddle and lead vocals, Darren Nicholson on mandolin and vocals, Marc Pruett on banjo, Tim Surrett on bass and dobro and vocals, and Caleb Smith on guitar and vocals.  Awards from the IBMA include Entertainer of the Year, Buddy’s Male Vocalist of the Year, and Tim’s Bass Player of the Year.

“Grit and Grace” is an inspiring song to carry on and succeed through “moxie and mettle,” while “That’s Enough” reflects on what is needed for true happiness.  There’s a selection of traveling songs with “Rivers, Rains, and Runaway Trains,” “Traveling Blues,” and “Tonight I’m Heading South” highlighting the hit the road urge to find a better life.  The band’s harmonies make each song sparkle and Marc’s banjo playing propels the instrumental backdrop.  “Rooster Rock” is a rollicking song that showcases the band’s instrumentals, and “Santa Barbara” is a fast paced, banjo-driven look at a dream – “we’d be living in Santa Barbara in a house the size of the Taj Mahal.”  Balsam Range has captured the best of contemporary bluegrass and is certainly a band that deserves wider acclaim.

Lluis Gomez is a Barcelona-based musician with interests in bluegrass and old time music.  He is a banjo, mandolin and violin instructor and runs a Barcelona Bluegrass Camp and the Bluegrass and Old Time Music Festival Al Ras.

The 20 songs featured in the book are written in tablature format and are also available as audio recordings on line.  Some well-known songs are Away in a Manger and God Rest Ye Merry Gentlemen, and several carols: Coventry Carol, Bagpiper’s Carol, Wexford Carol, and Devonshire Carol.  Great start for your very own holiday concert!