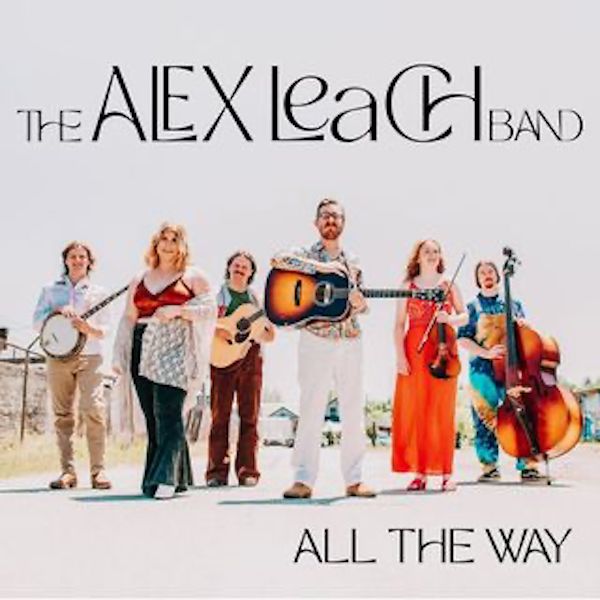 Alex Leach Band:  All the Way

Song List:  Together, Walk a Mile in My Shoes, Slip Slidin’ Away, Today Could Be My Last, The Game Is Always Different, Little Secret, Loveland, She’s On a Different Train, Wanderlust, Lineman in the Rain, Up To You, High Tide.

While the Alex Leach Band was only started three years ago, Alex has had a long career already as a radio DJ and a banjo player with the Ralph Stanley II band.  The band has a fine blend of instrumentation and beautifully blended vocals with Alex and his wife Miranda doing the honors.  Also in the band is Kasey Moore on fiddle, guitar, and vocals, Zach Russell on guitar, mandolin, and vocals, Baker Northern on banjo, and JT Coleman on bass.  Californian Josh Gooding also is featured on mandolin on several of the songs.

Alex is also a talented songwriter and there are 10 band originals on the album with two covers.  Joe South’s “Walk a Mile in My Shoes” has an uptempo rendition with more of a challenge in the vocals.  Miranda and Alex give Paul Simon’s “Slip Slidin’ Away” a carefully paced harmony vocal with the tinge of regret weaving around the fiddle accompaniment.  Baker’s banjo provides a strong rhythm backdrop to give the songs a more traditional sound, and the guitar and mandolin also help with the pulse. Lyrics are more thoughtful and Alex’s heartfelt high tenor adds an emotional involvement in the stories of mismatched lovers and quests for happiness.  “Lineman in the Rain” is the aftermath of a tragic car accident, and the singer’s pain is clear.  “Little Secret” hints at a conspiracy between two people but it’s never clear just what will happen.  Perhaps that’s true of life itself.

“Loveland” is a play on the name of a Colorado town, and its meeting of lovers on a bus reminds me of Paul Simon’s “America.”  But there’s always a train – “She’s On a Different Train” sums up the end.  “Together” opens the album with a reaffirming community, and “Up To You” points out that optimists and pessimists have divergent views – a storm brings trouble or a storm brings rain for the flowers.  Definitely worth a listen.