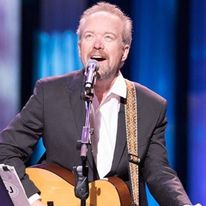 Song List:  Bad Decisions, I Won’t Take Less Than Your Love, Red Satin Dress, He Almost Told Her, Suffer a Fool, Deeper Than the Holler, Mountaintop, Long Time Ago, What My Heart Believes, Aunt Jenny’s Blue Dress, Not Too Much to Ask, The Gambler.

Don Schlitz is not one of those country music stars that can fill a stadium, but many of his songs have been hits for country stars, and have earned Don a place in the Nashville Songwriters Association Hall of Fame.  He is also the recipient of several Grammies, and CMA Song of the Year awards.  Don performs twelve of his songs on the album with a bluegrass band:  Aubrey Haynie on fiddle, Scott Vestal on banjo, Dennis Crouch on bass, Cody Kilby on guitar, Casey Campbell on mandolin, Rob Ickes on reso-guitar.  Don’s warm vocals are balanced against a stellar instrumental backdrop and the careful crafting of lyrics enchant and delight the listener.

His “The Gambler” is perhaps his most famous song, and one of Kenny Rogers’ greatest hits.  Don’s version has a melodic banjo underlying the lyrics, and a smooth delivery that has a storyteller’s charm.  “Bad Decisions” also has a banjo rhythm as Don cycles through bad decisions make good stories which get you wild women which cause bad decisions and he cycles through several bad luck stories.  Del McCoury and Ricky Skaggs present guest vocals on “I Won’t Take Less Than Your Love,” and Stacy Schlitz joins Don in a duet with “Not Too Much To Ask” which should be a showstopper for any band with a lead male and female vocalist.  For fans of stories with a happy ending, Don’s “He Almost Told Her” unfolds the love story of two shy folks who loved each other but never told the other.  “Aunt Jenny’s Blue Dress” is a twist of fate where a new dress to impress a husband is saved for a funeral, and a red satin dress with a “neckline that left nothing to confess,” is an influential part of a murder trial.  With this collection of songs, Don demonstrates that he is a fine songwriter, and his songs are certainly worthy of bluegrass interpretations.