Brenda reviews Jim Hurst:  From The Ground Up 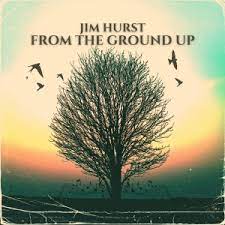 Jim Hurst:  From The Ground Up

Song List:  Sunnyside Garden, Nothin’ To Do But Pray, Weary Old Highway, Train of Trouble, Easy Does It, It Started With Love, 15 Miles to Birmingham, A Stones Throw Away, Back to the One, John Williams, Oh Lonesome Me.

Over the years, Jim Hurst has been part of many country and bluegrass projects.  A superb guitarist, he has earned the IBMA Guitar Player of the Year several times.  In the last decade, Jim has focused on a solo career with his vocals, original songs, and guitar playing in the spotlight.  Jim has gathered a fine supporting cast of musicians to present a band sound:  Shawn Lane, Alan Bibey, and Don Rigsby on mandolin, Michael Witcher on dobro, Christian Ward , Jason Carter and Michael Cleveland on fiddle, Kristen Scott Benson and Scott Vestal on banjo, and the vocal harmonies of Johnny and Jeanette Williams, and Darrin and Brooke Aldridge.

“Easy Does It” blends Jim’s guitar playing in Michael’s dobro playing in an acoustic romp with Emory Lester adding mandolin flourishes.  “Weary Old Highway” is a song of the traveling musician whose life on the road is filled with cheap hotels and the glamor of living alone. Don Rigsby joins Jim as the two join voices and instruments in the Delmore Brothers classic “15 Miles To Birmingham.”

John Cadley wrote three of the songs including “Nothin’ To Do But Pray” with its commentary on the folks in Washington, the bluesy “Train of Trouble” about a woman with her own supply of baggage, and the tender story of “John Williams,” the last soldier killed in the Civil War.

Jim also wrote several of the songs that have affirmative messages. The gentle waltz “It Started With Love” is a beautiful gospel song with the Williams, and the support offered in “A Stones Throw Away” also has the Aldridges adding vocal harmonies.  Jim Hurst has assembled a fine collection of songs with heartfelt vocals, enhancing instrumentation and messages for a better world.