(Editor’s Note: So what was Jean bucket-lisiting five years ago? Let’s have a look at this 2009 Welcome.)

There’s an old saying, “be careful what you wish for.” A few weeks ago, I posted a question on the message board asking others about their bucket list. I then proceeded to tell everyone in CBA land that I wanted to learn to “take breaks” on my guitar while jamming with others. I didn’t get an overwhelming response to my post but I found out later that quite a few folks did read it.

I received an e mail from Jerry Pujol telling me he would be willing to help me learn to take breaks on the guitar and we could start when I got to Plymouth. I hadn’t really planned on going to Plymouth but this (along with several e mails from Pat Calhoun) was the nudge I needed to change my plans. I asked Jerry if I should be working on learning the scales in different keys. He told me it’s a beginning but he suggested just starting out learning to pick a simple song like “Wildwood Flower” and keep working on it until I get it down good, then go on to learning another song, such as “Red Wing.” He encouraged me to watch the movie they showed at Plymouth called, “Will the Circle Be Unbroken,” the Carter Family story. He told me to be sure to pay attention to Maybelle Carter’s picking style because he was going to show me how to pick the way she does. She used a thumb pick and a finger pick on her index finger and the style she developed was to pick a melody and strum a rhythm at the same time. Jerry spent some time with me as promised and even made a tape for me to work with. I’m sure I’ll be picking some Wildwood Flowers with him at Colusa.

The next person who offered me some guitar instruction was Cliff Compton. He used a different approach altogether. We worked on what he calls the “Hillbilly Dots.” It’s a way of filling in while you’re singing or accompanying someone else, rather than just strumming and keeping time with the boom-chucks. It was fun and it’s a short cut to make it sound like you really know what you’re doing when maybe you don’t actually even know the music theory behind why it works. I’m speaking for myself here.

On Saturday, I was walking down the street in front of the vendors and met Chef Mike who literally took me by the hand and told me “There’s someone I want you to meet.” He introduced me to Rick Sims from the Fifth String Music. He told Rick about my bucket list and how I wanted to learn to take breaks. Rick told me to grab a guitar and sit down and proceeded to give me a 30 minute lesson. He emphasized the use of the right hand and how it’s every bit as important as the left hand in guitar playing. I was given some exercises to do which involve moving up and down the strings while alternating upward strokes and downward strokes. I wish I had started all this 50 years ago. We’re too soon old, too late smart. Besides, when you’re 14 years old, you don’t think of bucket lists…the things you want to accomplish before you kick the bucket.

On Saturday afternoon I saw Audie Blaylock sitting alone in a patio area so I decided to introduce myself and tell him how much I enjoyed their set. He told me he was going to give a guitar workshop in a few minutes and encouraged me to join the group. There was no “hands on” type of instruction but he did emphasize learning scales and said that the guitar player’s job was to keep time and provide back-up for the singers and that when you “take a break” it’s just that, a short break, and then you go back to your real job.

I’m glad I made the decision to attend the Plymouth Festival, it just reaffirmed to me that bluegrass folks are the best folks in the world. There were some people that I had only met through the CBA Message Board or by e mail and finally got to meet in person, folks like J.D. Rhynes, Lynn Cornish, and Nell Robinson. I jammed with Ernie Hunt, a fellow country singer. I spent an enjoyable couple hours with a mandolin player named Renee who has a beagle named Nicholas. I was surprised to see a couple of people from my home town of Hoopa at Plymouth, they happened to be passing through and saw the sign for the festival and decided to spend the day. I was especially pleased to get to know the Anderson Family. Not only are they gifted musicians, they are really nice people. I had fun chatting with Daisy who showed me her horse collection. I was especially excited to watch the kids perform with Wayne Taylor and Appaloosa. They did a fantastic job of entertaining, displaying talent, poise and professionalism. It’s obvious that they love what they do. I admire their humility even though they have every reason to be proud of their accomplishments.

There was another young lady that I met briefly on Friday. She was photographing the flowers down the center of the street in front of the food court. She had her lens stuck down the throat of a morning glory when I approached her. I figured her for an artist and we had a nice chat and I showed her some of my artwork. I told her that I’m not as prolific as I’d like to be. I have so many other responsibilities and when I finish my chores for the day, I’m usually too tired to start a project. This is when she told me something that really had an impact. She reminded me that I will never remember a load of laundry that I washed or a meal that I cooked, or the weeds that I pulled, but I would remember each painting that I do. She admonished me to let the mundane things go now and then and make time for the things that really matter to me. She’ll probably never know how much I needed to hear that.

This brings me back to my desire to improve my guitar skills. I will need to make it a priority and be willing to let some of the less meaningful occupations slide at times. There will never be a perfect time to practice picking, paint a picture, or work-out at the gym. I have to set time aside for these pursuits and not give in to the tyranny of the urgent if I am to make any progress. Thanks to Jerry, Cliff, Chef Mike, and Rick Sims for helping me on this journey to better picking.

Did you know that September 22nd was the first day of autumn? The Fall Camp-Out is just around the corner. I’m looking forward to hearing James King. I challenge you all to learn a new song between now and then. How about “The Leaves Mustn’t Fall?” See you in Colusa. 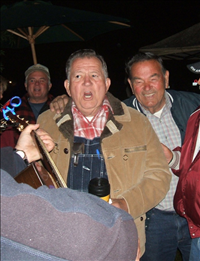