By the Railroad Line 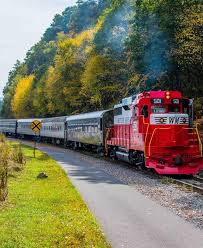 I have always loved trains and many times I have camped at bluegrass festivals that happened to be right next to railroad lines. Sometimes the train whistle is a bit too close and the loud whistle disrupts your campside jam session. But sometimes the train’s arrival is completely appropriate. Like if you’re in the middle of a train song and the whistle is in the right key.

Whenever I camp at such venues I’m reminded of the fact that I grew up in a train town: Greenwood, South Carolina:

Here’s what my home town web site has to say:

The history of Greenwood evolved around the development of the railroad. At one time, nine railroad tracks crossed through “Uptown Greenwood,” Greenwood’s central business district. Greenwood got its first railroad, the Greenville & Columbia, in 1852 as an effort to locate the first track in Upstate South Carolina. Slowly by the 1930s and 40s, Greenwood became one of South Carolina’s leading rail centers. With the development of the automobile in the early 1900’s, the importance of rail for daily travel declined. Efforts began in the 1930’s to seek the removal of the rail system from Uptown Greenwood. It was not until 1982 when the final train came down the center of Main Street into Uptown Greenwood.

I hear those train whistles at festivals and it doesn’t annoy me one bit. It reminds me of a happy time when not a day went by that you didn’t hear or see a train. If you had to drive into town there was a very good chance you would be delayed by a freight train making its way through the heart of town. People would probably be very annoyed by that sort of thing these days. Just as we get annoyed by an unexpected freeway rubbernecking gridlock snag. Nowadays people would pull out their cell phone or laptop and get something done but in those days all we had was a car radio or a book. We just accepted the delay as a part of life and had fun watching the train roll by. You learned the value of a thing called patience.

The sound of a whistle at the crossin’ road
And the tanks and the trucks and the tractors on the flatcar load
Becomes a part of the soul and a heart and the mind
Of a boy who’s raised by the railroad line.

By now you’ve figured out that one of my favorite train songs, (one of my favorite songs period) is Chris Ledoux’s Raised by the Railroad Line, made famous to Bluegrass fans by John Starling of the Seldom Scene:

I still have the penny that we placed right in the middle of a railroad track one sunny day long ago. I remember seeing the train go by squishing it to the thinness of paper. The one cent piece was so hot when we picked it up that it almost burned your fingers. And Lincoln’s face was distorted but still recognizable. The penny had not been destroyed, but that was not quite as indelible as the awe we kids shared at the power of a big locomotive train.

I’m glad that trains still have an important role in our modern society. Trains are perhaps not the wonder they once were. In their “prime” they were quite literally the fastest thing on the planet. But it still gives me a thrill every time I see a long train speeding by through a desert plain carrying goods from scores of warehouses or speeding along with passengers who have the leisure to stroll from the observation car to the dining car instead of pulling into the first McDonald’s they see from the interstate exit.

Does anybody know what’s in store for the mighty train? Sonoma County is trying a light rail down to Marin. The central valley bullet train may one day connect San Francisco and Los Angeles. And trains may some day roll through the heart of Healdsburg as they occasionally did when I first moved here. One thing I do know: people will always have a fascination for trains or for what trains used to be. And people will always sing songs about trains.