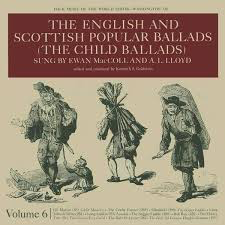 It is interesting to think of just how old some of the music that crept into the bluegrass genre from long ago is. Bluegrass songs often tell a story. That might be a murder (most likely by a guy named Willie) but it might be something quite different. In the middle ages balladeers traveled between villages and shared epic stories with the aid of music and rhyme which many people could relate to. It is a long tradition to say the least.

“O, where are you going?” “To Scarborough fair,”
Savoury sage, rosemary, and thyme;
“Remember me to a lass who lives there,
For once she was a true love of mine.

Sound familiar? Paul Simon produced a big hit by adapting that old English ballad. Many scholars of folk music are familiar with the Child ballads, a numbered catalogue of traditional ballads from the British Isles compiled by a Harvard professor named Francis James Child. Paul Simon’s song, made famous by the movie The Graduate, is based on Child ballad #2, the Elfin Knight. Bob Dylan adapted the same song for his Girl From the North Country.

The Child ballad list is only a few hundred ballads long but it’s interesting to observe how many of those old songs have been recorded by bluegrass and old time musicians over the years. A few examples:

1) Ralph Stanley recorded Henry Lee (Child *68 “Young Hunting”). This is a favorite of mine because the perpetrator of the crime is not Willie but actually a female character.

2) Jerry Garcia and David Grisman performed Fair Ellender (Child #73) on Shady Grove
3) Tim O’Brien performed Fair Margaret and Sweet William (Child #74) a cappella on Songs from the Mountain
4) The Carter Family recorded The Storms are on the Ocean, aka Lord Gregory (Child #76)
5) Ralph Stanley recorded Little Mathie Grove (Child #81) as did Norman and Nancy Blake on Just Gimme Something I’m Used to
6) Tony Rice performed Georgie, aka Geordie (Child #209) on Blake and Rice 2. It was also done by Doc Watson and others.
7) Three Nights in a Bar Room, aka the Cabbage Head song is the same as Our Goodman (Child #274) and performed by Clint Howard on the Kruger Brothers’s Carolina Scrap Book
8) Sinking in the Lonesome Sea by the Carter Family is The Sweet Trinity (Child # 286)

These are not exactly classic bluegrass songs suitable for riveting banjo breaks or mandolin solos but you get the idea. They certainly fit as old time song classics or for a change of pace in a bluegrass set perhaps. If you’re looking for fresh material there are almost three hundred other Child Ballads out there ripe for the picking.

Singer/songwriter Anais Mitchell cut an entire album with Jefferson Hamer using the Child Ballads. Tracks include Riddles Widely Expounded (Child #1), Willie’s Lady (#6), Tam Lin(#39), Sir Patrick Spens (#58), Willie of Winsbury (#100), Geordie (#209) and Clyde Water (#216). Notice that Willie is a prominent character in these titles as he is in so much of bluegrass lore.

If your need for new old material is greater and you’re really serious you might want to check out Steve Roud’s list instead. This chap from the UK took Child’s idea to the next level, including nearly 25,000 songs in a searchable data base including recordings up to 1975. Songs such as the Cuckoo, White House Blues, Bury Me Beneath The Willow, The Young and Single Sailor (aka Pretty Little Miss in the Garden), etc.