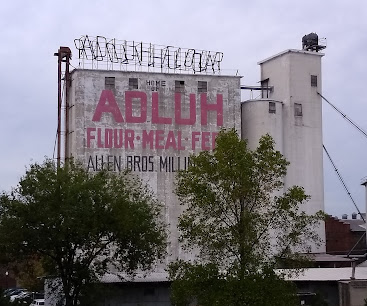 I visited my old home town of Greenwood, South Carolina over the holidays. The grits they served at the Inn on the Square were fantastic. Stone ground Adluh flour. I’ve never tasted better. So with the Bakersfield 48 coming up I figured I’ll republish this article from a few years back:

If you’re gonna play bluegrass, you need to know something about grits. I’m not talking about textures of sandpaper from the hardware store and I’m not talking about hip hop groups. No, I’m talking about a delicacy native to the part of the country that gave birth to a lot of great music, including bluegrass. Grits have to be one of the most misunderstood foods around. People from the north don’t quite know what to do with them. They put sugar on them, thinking they must be some poor relation to other hot cereals they are more familiar with, like oatmeal and cream of wheat. Grits can taste fine with sugar or syrup or honey, but that’s not really how to eat them.

Few restaurants out here in California serve grits, and most of those are in Southern California, where the descendants of Okie migrants are thickest. If you want to try them, you might have to do it yourself. First you have to find a place that sells grits. Don’t try the local trendy, chic grocery. I live in the Sonoma county wine and food region. When I tried to buy pimiento cheese spread at the local grocery, I couldn’t find any at all. But I counted twelve different kinds of hummus. If you want the kind of food a southern boy would eat, you’re going to have to go to the place that caters to the masses. The kind of place where they’d put Velveeta cheese in the gourmet food section. I go to Safeway when I want to buy grits.

Don’t buy the so called instant grits. All grits cook fast so you’re not saving any real time and they don’t taste as good. Cook the grits in boiling lightly salted water until they are nice and tender. The final consistency should be slightly runny. Put the grits onto your plate next to the bacon and eggs. Now you’ve got it. You see, grits substitute for the hash brown potatoes, not the oatmeal. Place a pat of butter in the center of the grits and while that forms a nice yellow lake, take a piece of bacon or sausage on the end of your fork and swirl it around in the grits. Take the meat, dripping with grits, and pop it into your mouth for the proper grits breakfast experience. Delicious!

Yes grits are a very versatile food that should be taken more seriously by foodies everywhere. And they’re healthy. Grits are made from corn that has been treated by the process that makes hominy. That process releases niacin for better absorption and most grits are by law fortified with vitamins. The Georgia legislature has formally designated grits as their official state prepared food.

We bluegrass fans owe a great debt to grits. Grits have nourished many a fine musician. Sam Bush named one of his CDs Glamour and Grits. One of our local California Bluegrass bands is named Harmony Grits.

If you’re in Bakersfield this weekend, go out and find a place that serves grits. I’ll bet your jamming skill will soar as much as your palate. Enjoy!

I miss my hog and hominy, my punkins and red gravy
My appetite is failing me, so says old Uncle Davy
But time has changed the old man, the sun is sinking low
My heart goes back to Dixie, and I must go.