A Successful Hybrid IBMA Wraps Up! 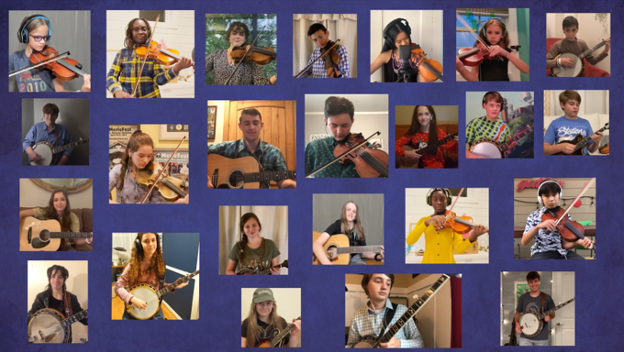 CBA helped IBMA this year by producing the Kids on Bluegrass Finale video, featuring 30 talented kids from throughout the US.

CBA was proud to be involved in a very successful IBMA World of Bluegrass.  This year’s event, a hybrid of in-person and virtual activities, was a memorable showcase of Bluegrass music.  CBA was well-represented at the event, with a half-dozen board members, officers, and volunteers spreading the word.  We’re proud of our CBA members who were nominated for awards:  Miles Quale, Teo Quale, Daisy Caire, and the Crying Uncle Bluegrass Band were all nominated for IBMA Momentum awards. Peter Thompson of KALW’s Bluegrass Signal was a nominee for Broadcaster of the Year and CBA’s Jam-a-Thon was a nominee for Bluegrass Event of the Year.  We’re particularly proud of past CBA board member Kara Kundert for winning the Momentum Industry Involvement Award, which recognized her dedicated work with Bluegrass Pride.  And this year MohaviSoul was the first IBMA Showcase band from Southern California in many years.  Our CBA Youth Academy Director, Kimber Ludiker, co-directed a wonderful online Kids on Bluegrass Program for IBMA and CBA was honored to produce a video finale featuring the IBMA Youth. The 5-minute video was featured during the glitzy awards ceremony and showcased 30 amazingly talented youngsters performing a tribute to some of the artists that we lost this year: Tony Rice, Byron Berline, Tom T. Hall, and John Prine.  We’ll be posting the video to our CBA website soon for you to enjoy.