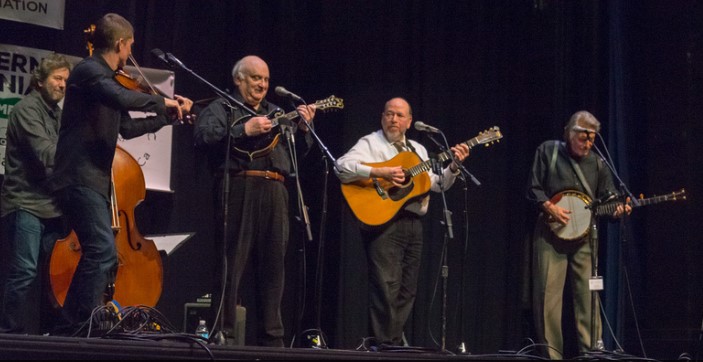 Like most people nowadays, my first experiences with music were hearing it on the radio, records or TV. Some folks grow up in a musical family, but I didn’t (my kids did, though).

Hearing music only from those three media outlets mentioned above tends to make you separated, mentally, from the fact that real musicians made it. Modern studio trickery enables the artists to put a tight, even sheen on the performances. Some records are made without any band member actually playing in the same room with another. Some records are made by one person, overdubbing all the instruments.

That’s what makes seeing a band live so important – what you hear, coupled with what you see, really impresses on you the skills and talent of the performers.

For those of us who also play music, as we listen to our efforts fall short (often WAY short) to these musical ideals, it can be tempting to think the pros create some of that gap by having better instruments, mics, sound support. This is true to some degree, but none of those things will get you a record deal or a spot on the main stage at Grass Valley – or the Grand Ol Opry.

One of the most stark realizations of this comes if you have a chance to watch these top pros warm up backstage.  There, without any pretense, sound support, or sometimes even instruments, your these wizards warm up their voices with impossibly tight 4 part harmonies, and you instantly know the talent and hard work behind it.

In no way should something like this discourage amateurs like me.  Instead it shows me it CAN be done, and it is most definitely worth pursuing excellence at the craft – to the extent you’re willing and able to pursue it.

Coming up next month, we’re going to see dozens of performers plying their trade, both on the stage and In camps, and we will reminded of the “realness” of music (Is that even a word?).  Not all music is performed like this – just wood, strings and vocal cords.  But there was a time the only way music could be rendered was live and in person.

It’s odd – originally records and radio gave folks an extra chance to hear music they tended to hear live, in concert halls, recitals, dances and front porches. Now we go to hear live music to see how it’ll stack up against what we’re hearing on radio, TV or the internet.  As long as the music reaches our ears, we’re doin’ all right!