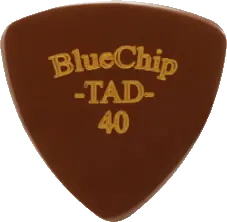 If you want to be a picker you gotta have a pick. Well at least for the most part. I’m just like the rest of you, I love to pick with fiddlers, who use that crazy thing called a bow. And I appreciate the bass players who make all that foundation sound with their fingers mostly. I’m perfectly fine with a claw hammer banjo player or ukelele expert who, like the bass player, uses his or her fingers to produce a good sound. But for most of us, playing music means using a plectrum, as the English refer to it.

I can’t tell you how many plectrums I have experimented with over the course of years in search of a good sound. When I started with the mandolin many years ago, I chose the Fender heavy three corner pick. It was a wild guess. I had no idea which pick would be right for me among the hundreds of available models. I studied my mandolin instruction books and I tried to get the best sound I could but the result of my efforts didn’t sound anything close to what I was hearing on my instruction tapes or what I heard on the bluegrass recordings I loved so much.

Maybe it’s not my fault, I thought. Maybe I’m just using the wrong pick. I played around with some other styles. Mandolin pickers gravitate between two shapes for the most part. Some use guitar picks and pick with the rounded edges or the point sometimes, but most mandolinists use oversize versions of the guitar pick which have either all rounded edges or all pointed edges. My Fender heavy had all pointed edges and when I experimented with a rounded edge pick I didn’t get much volume so I stuck with the pointed edges.

Using the correct pick for your style of playing is important. When Jethro Burns and Dave Apollon were discussing which hand was more important for playing they agreed. It’s the picking hand because if that’s not right it doesn’t matter what the fretting hand is doing. All notes are shaped by the fretting hand and it’s natural for any musician to struggle with all those complexities while trying to make good music, but as Chris Thile points out in one of his instructional videos, you have to focus on the picking hand first because it’s the one that produces all the sound in the first place.

The greatest thing about picks is that you can experiment with them as much as you want to find the one that’s just right for you. That experimentation won’t cost you very much money. On a lark I once coughed up five dollars for a single pick. It was supposedly made from water buffalo horn and every bluegrass mandolin player knows that the greats all used tortoise shell, which is now banned. Maybe this would be the next great pick, I thought. After all, it’s from nature like the endangered tortoise. Sadly, the buffalo horn pick wasn’t for me and the five dollar investment sits in my case mostly unused. I’ve since heard of picks priced at a thousand times that. Ancient meteorites might make the best material for a pick, but I’m not willing to pay that much right now.

My greatest indulgence when it comes to picks is a few Blue Chip picks I now own. They are way too pricy for most but I have gifted them to a few friends and everybody seems to like them. So they are probably worth the money if you’re willing to spend it.

Some of the best picks I have ever used come from a material I got interested in after watching a movie called The Graduate. Yes, I’m talking about that amazing substance called plastic. I can pick up a whole twelve pack of plastic picks for a modest sum and experiment to my heart’s delight. When I find out about a new pick that I might be interested in, it takes me back to the days when I was a kid. For me picks are the baseball card or marble collection of the bluegrass baby boom generation. I love to swap them with friends and I love to assess their advantages and disadvantages.

A pick choice can be a very personalized thing. I’ve known people who swear by picks they fashioned themselves from discarded credit cards or filed-off ferry tokens. I’ve seen picks with words of wisdom written on them like “Life is a song; love is the lyrics”. Getting a new pick is an easy way to feel like you’re doing something to improve.

I don’t know much about picks for instruments other than the mandolin but I have played around with the guitar and the banjo a bit. I tend to use my familiar mandolin flat picks when playing the guitar but now and then I try the teardrop pick for guitar and even for the mandolin too. The most important things I’ve learned about banjo picks are that 1) you put them on facing the right direction (I had to have somebody show me the first time because I had seen an old time banjoist put them on “backwards”) and 2) you make sure they won’t come loose. I prefer the plastic thumb picks but if I could actually play that darn thing I might be a metal guy. I do prefer thin finger picks like the Dunlop as opposed to weightier versions I’ve tried.

So you see how it is? You just heard a so-called mandolin player go on and on about the subtleties of pick selection for a couple of instruments he has absolutely no idea how to play. Hey, we all need something to absorb our interest and the subject of flat picks, finger picks, thumb picks is endless. You can have the pick of the litter. (Note in passing, I once played in a pick up band called the Nose Flute Pickers).

Maybe you should try a new pick. What’s your favorite pick right now?