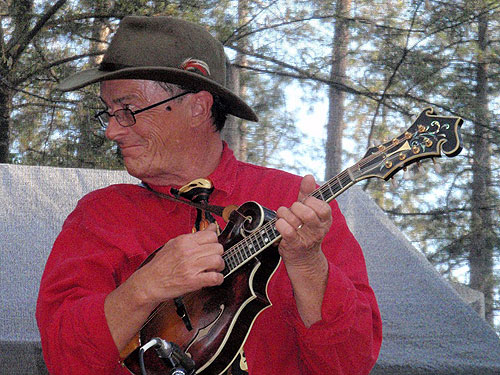 A collection of photos of Pete can be found on the CBA Photo Archive HERE. If any of these photos spark a special memory you have of Pete that you would like to share, please click on “View Comments” then add a comment.

Arthur Knapp: Pete and I were at NYU about 1972. Our bluegrass band had Pete was on mandolin and vocals, Hunter Owens, guitar and vocals, Matt Glaser (in high school then), fiddle, and me on guitar. Pete wrote out the lyrics on a placemat for me of “The Streets of Baltimore.” I still got it! In 2018, I had the good fortune of seeing Pete (for the first time in 40 years) with the Central Valley Boys at the Mt. St. Helens Festival. We jammed late into the night.  RIP brother. Play with that heavenly band.

Yoseff Tucker: I met Pete and Dave Gooding at the same time at the 2006 CBA Spring Campout in Turlock. I knew maybe 3 songs and I had a cheap Martin made out of Formica. We still jammed all night.

Victor Skidadenko: Pete was the first person I ever met and jammed with at a Bluegrass Festival.  He really helped me get acclimated to the whole experience.  I am glad to have had him as a good friend for the last seventeen years.

Mark Hogan: Pete was a mellow guy. Serious about his bluegrass. A teacher. Curious enough about mandolins and fiddles, he decided to build some. I’m going to miss him.  I suggest we all make sure we touch base with those people that mean so much to us. Sooner rather than later.

Robin Frenette: Pete would always be out jamming long after everyone else went to bed. I remember waking up one time in the middle of the night at Summergrass to some great fiddlin’ so I got up and grabbed my guitar. Pete and I were and I were the last ones standing at that jam as the sun was rising an hour or so later.  I’ll miss Pete at those late night jams.  As a festival photographer, I got such a kick out of the silly facial expressions he would make on the stage, especially when he saw me pointing the camera at him.

Dave Berry:  Peter was the most enthusiastic supporter of the bluegrass sound that I know. I cherish the times I was lucky to jam with him, from the very first time at Hickstival where I first met him though our mutual and departed friend, Lee Birch to the Campouts in Lodi.  He could be both tough as nails and soft as butter. He spoke his mind, didn’t mince words, yet was always very encouraging. I can’t imagine Good Old Fashioned, Bolado Park, or Hickstival without him.

Jim Lewin: Pete Hicks was a dear picking buddy of mine for three or four decades and I’m still absorbing the news. We played bluegrass and country gigs together and made two records at my home studio, Upstairs Jam and Trailride. When I was playing with Frank Wakefield he and Lora produced several shows with us, bringing Frank out for his last California appearances. Pete sat in. He was the opposite of a jam buster. He was a lightning rod for good jamming. Everybody’s friend, he’d meet you where you were and pull you in. Always ready to pick. OK, he would bark out orders sometimes, but we let it roll off our back and listened. Because he kinda did know everything about this music we play. We took the challenge and it made the music better. I learned a lot from him. I guess we all did. His playing was always spot on, a true master. He was all about the music, a lifer. We always had good times playing and hanging together. I loved Pete Hicks.

Tom Ball: In Kathmandu, Nepal in ’75/’76, Peter, myself, a fellow Yank named Larry, an Aussie whose name I’ve forgotten, and a young Nepali guy named Raju put together an informal band we called the Swayambhu Swamp Stompers. Our ‘gigs’ consisted of Pie Shops and Chung Shops. If I remember correctly, Pete was in Nepal on an extended visit but was living in Thailand. He was mostly playing mando and guitar, but that could’ve been because nobody in Nepal had a fiddle…? Anyhow, he played great and was the glue that held us all together.
At that time there were pie and pastry shops on almost every block in Kathmandu; cannabis being openly tolerated, the backpackers all had the constant munchies. (Or so I’m told.) Suddenly pie shops popped up everywhere. The Nepalis were smart businessmen.
The Chung Shops were mostly Sherpa or Tibetan, and chung (AKA chhaang) sort-of looked like watery cottage-cheese with little sticks and bugs floating in it. It was homemade and about halfway between beer and wine. They served it by ladling it from buckets into steel bowls. It was said to be made from millet, although you could’ve fooled me — stuff tasted kinda like crab-apple mixed with acetone. It was also, shall we say, an instant cure for constipation. Still, the band all dug it cuz we could all get gloriously glazed for about 15 cents. I remember one time Pete had me laughing so hard I got Chung Nose.
Anyhow, after Nepal, he and I fell out of touch for about 40 years till we happily reconnected through the internet. Since we both pursued music and had tons of friends in common, I always hoped we could cross paths in person again for some recollections and a few tunes, but alas, it was not to happen.
I shall miss you, old friend. Peaceful rest and see you at the next gig. Namaste.
Molly Tuttle:
I knew Pete as a kid and young adult going to CBA festivals. We jammed together many times. He was always a friendly face around the campground and he will be dearly missed in the bluegrass community.
Jack Dubow: I got a call last week from Jim Lewin and was shocked and saddened to hear that Pete had passed away. I met Pete almost 30 years ago at a jam at Dennis English’s house. That jam went on every month for years and years and Pete and I were regulars there. Besides picking we often talked about repairing old instruments and making them. I mostly saw Pete at Jams and the many Festivals we went to every year and Pete was someone I always hung out and played with. When learning a new song Pete always picked it up right away and really knew music. While he played a lot of traditional bluegrass one of his ( and mine ) favorite banjo players was Mike Munford who plays a lot of newgrass and when we would play Pete would always say to me play some Munford licks. The festivals are going to feel different with out Pete there and he and his music will be missed by many. RIP brother.