Roadblocks – Is the Universe Trying to Tell You Something? 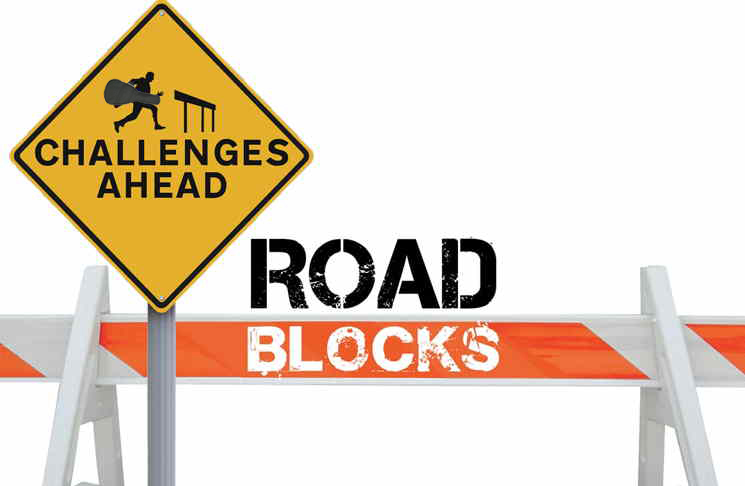 I like playing music.  I bet a lot of you like doing it too.  And, nine times out of ten, it’s a no brainer.  You grab your instrument and attend a jam or a gig.  Piece of cake, right?  Not so fast!  Evil forces are at work, conspiring to keep you from the musical enjoyment you deserve.

Here are the some of the pitfalls that lay directly in your path – usually when you least expect it!

There is no shortage of confounding roadblocks between you and your gig.  Getting lost is always a possibility – how many times has your carefully printed-out Google map been completely and utterly wrong.  Directions to remote wedding locations are especially notorious.  The directions often include things like “Go 20 miles down Old Mill Road then turn right.”  Invariably, Old Mill Road is right next to New Mill Road and neither of them have a crossroad at the 20 mile mark – something only discoverable after 30 minutes of driving on each.  Did I mention there’s no cell reception on the MIll Roads?

How many instruments do you bring to a jam or a gig?  If you’re a guitar player, probably just one guitar, right.  Same if you’re a fiddler?  What if you show up with an instrument case, and discover upon arrival that it’s actually an empty case?  I’ve seen this happen!

Other common mishaps include forgetting a strap or having the strap button go missing.  Do all you guitar players have extra bridge pins in your case?  Those pesky little devils can fly out when changing a string and they are darn hard to find sometimes!  (They fall between the floorboards of a deck really, really easily!).

I love the audiences in San Francisco, and they have a vibrant bluegrass scene.  But parking can be just awful there, as in other cities. I arrived one hour early to a gig in San Francisco, then spent 55 minutes trying to find a place to park. Sometimes, the only option is a parking garage, and the cost to park may quickly eclipse your pay for playing.  I played a Farmer’s Market in Walnut Creek one time, and was advised to use a specific garage because they had a special rate for Farmer’s Market attendees.  After 4 hours of playing for a total of $30, I went to get my car and the guy said “That’ll be $25 to park.”

“Hey buddy, Have a heart!”, I said. “I just played for 4 hours in the sun, I was told you have a special Farmer’s Market rate.”

If you have a vehicle towed or stolen while playing at a gig – it really hurts.  Same goes for parking tickets.

There isn’t even space to go into missing strings, busted instruments, vehicle breakdowns, calendar mishaps, health problems (not to mention pandemics!) and double-bookings.  GIven all this, why even bother playing music?

If you have to ask, you’ll never understand!  Sure, some days it doesn’t seem worth the hassle, but in the long run, it’s a no-brainer.  It IS worth it!