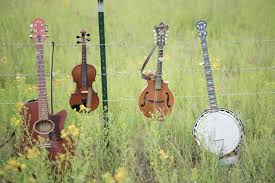 The band scramble is a long time tradition of bluegrass festivals and get-togethers. Some people like them and some don’t so thankfully participation is always optional. The format of a bluegrass band scramble is pretty standard. Participants are invited to put their name into a lottery which randomly assigns would be band members to an instrument of choice. After the drawing, members of the newly created bands get together for an hour or so to work up a couple of songs for the band scramble contest.

Think of a bluegrass festival version of a TV reality show. That’s kind of what it’s like. At its best a band scramble can bring together musicians of different abilities and different musical interests to cross fertilize in the best of ways. At its worst a band scramble can be a complete disaster in which frustrated would be musicians have no idea how to make such an impromptu joint effort successful.

The key to a good scramble is to encourage participation at all levels and make it fun. Generally a committee of judges is empaneled to score each band’s performance. Points might be awarded for the most creative band name or who tells the best joke. You might have to do a good yodel or a good bass solo. There needs to be something besides a strict musical proficiency element to make things fun for the participants and the audience.

Bluegrass events are full of would be pickers who are just beginning to feel confident enough to get out there and play music with others. Some have bluegrass friends who can gently nurse them along into the joys of jamming but most are very reluctant to mix with strangers who might be camping nearby and seem so much better at playing music.

The band scramble is the great equalizer for new musicians who want to try their hand at playing in a group. Our bluegrass community is generally a very welcoming bunch of people and the band scramble is a vehicle for really good musicians to interact with their aspiring brethren in an informal way. They may need to shun these same newbies at their hot jam session in other situations but I admire talented musicians who put their chit into a band scramble knowing that some of their band members will require a lot of coaching in order to make a reasonable performance.

We all have our talents. Some of the weakest band members in a band scramble might have to watch you very closely if you were in their nuclear physics lab. The great thing about a band scramble is that people are all put on the same level for a special moment in time. Making some good music is the only goal of a scramble band and people who come from different musical backgrounds are tasked with finding a common ground to produce the best result they can.

In other words the band scramble is a metaphor for what our world community should be more like. If forced into a situation where you had to collaborate with a stranger from another country for the common good would you be able to do it?