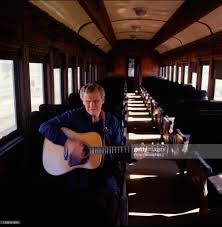 Who is that lonely guy in the photo playing guitar in an empty railroad passenger car? He looks a little bit like Doc Watson. Doc is ten years past and gone now of course but all the good times are possibly not yet past and gone. Don’t you want to just join that guy and play some bluegrass?

Well you can join other Doc want-to-bees this January by continuing a CBA tradition I first experienced a few years ago. Get your reservations soon and check with Ted Kuster for more information if you plan to shuttle down from Northern California in a couple of months. I published the following description when I first made the trek. Our first journey was more like a 53 hour jam but that was still enough to make it a fun trip. Suffice to say, train songs were well represented in our jams. Here’s my first Bakersfield train remembrance:

What could possibly be better than jamming at the now famous Great 48 Hour Bluegrass Jam in Bakersfield? There’s nothing I can think of that even comes close, especially during the otherwise slow first weekend after the New Year’s holiday. One fall day I mentioned to my fellow weekend jammers how much fun I had had at the two Bakersfield jams I had been to. I was planning to go again that year and I hoped at least a few others might be interested. Sure, it’s nice to meet new people at a big event but it’s nice to see familiar faces too.

Many of my fellow jammers had heard of the event but I was one of the few who had ever been. “If I only had the time” seemed to be the sentiment, Then Jason, came up with a truly brilliant idea: “If I could go, I’d go on the train. You could jam all the way down and back”. The train ride happens to be five hours each way. Thus was born the idea for the fifty eight hour jam.

Loraine took Jason’s idea and ran with it. She had ridden the Central Valley AmTrak train too and knew all about it. Before you knew it, Jack and Lorie were on board. Now there’s a band! But it’s only guitar and bass with some good singers. They need a mandolin but at this point I’m reluctant to go by train because I took my bicycle last time and had some fun rides down in sunny Southern California. Loraine e mails me some information about how I can easily take my bike on the train so now I’m wavering.

Meanwhile, several of us show up at a great party at Jim’s house the first weekend in January and jam like there’s no tomorrow. Except there is a tomorrow. Jim might be interested in going and bringing his guitar and mandolin. I decide this is a rolling party I don’t want to miss, bike or not, so I’m in with both feet. Too bad Jason, who had the idea in the first place, can’t go. He’s an English teacher and it’s tough to get coverage for your classes at his school.

But at the last minute, Jason finds a substitute and I’ve got a roommate to halve the cost of my room! All we need now is fiddle and banjo. Nobody else signs on from our group but when we gather at the train station in Martinez on Friday, I meet Fred the fiddle player whom several of our group know from music camp. He’s decided to take the train too from his home in the east bay and he’s happy to have fellow Bluegrass jammers in his midst. Everyone is excited, we’ve got a great jam all the way to Bakersfield.

Excitement on the platform turns to disappointment on the train. First, we are told by the conductor that we can’t bring a stand up bass onto an AmTrak train. Lorie explains to the conductor how she had already cleared it with Amtrak and had even bought a separate ticket for her bass. We ask about playing our instruments and are told that it is not allowed. We ask about relocating to play in the next car, where there is only one passenger and we are told that we can’t do that either (even though the passenger does not object). After an hour of silence on the southbound train we decide to sing some a cappella gospel songs. The few passengers within earshot seem to enjoy it but the conductor walks by and tells us that people have complained about the noise so we have to stop. We do but in retrospect, i wish we had held our ground and let them throw us off the train so we could sue.

As advertised, the 48 hour segment of the 58 hour jam went seamlessly. We had some great jams, met some great people, ate some great food and heard Michael Cleveland live! We even got a few hours of sleep between about two and six. We hated to leave, especially knowing that we might be silenced on the train again.

Fortunately, the train ride home was the complete opposite of the train ride down. We found a space on a different kind of rail car that was split between storage and seating. It was just the right size for our group, but three other people chose to sit with us and listen. Two of them independently said it was the most enjoyable train ride they’d ever been on, and a few curious music lovers crowded the open space, applauding after each number. One listener took video and said she’d post it on You Tube.

Let me tell you, that was a great jam! I still remember it as the very best jam I have ever been privileged to be a part of. We had so much lost time to make up and everybody had their favorite train song ready for the occasion. And the acoustics in that sardine can were awesome!

Jason, whose brilliant idea made the whole thing possible but couldn’t go the first year, has since attended the great 48 via train jam. I wish I could have taken part in in those jams too but I’m sure they were just as good. I hope we can make a fifty eight hour jam happen again this year. Check with Ted Kuster for details as described nearby.