The Lifespan of a Bluegrass Jam 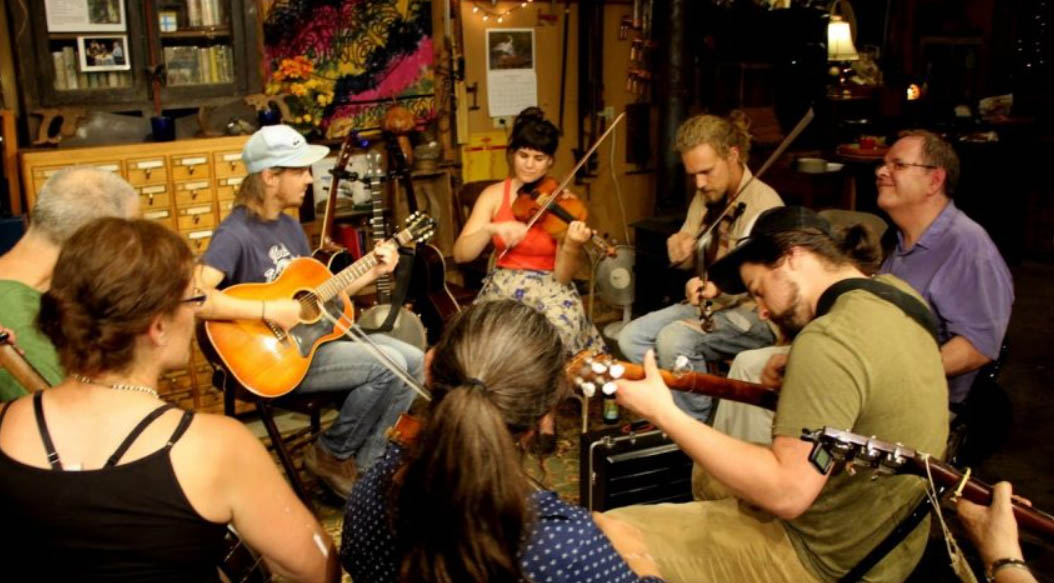 I know I’ve written in the past about the highly visible lifespan of a spontaneous jam at a bluegrass festival. Stage 1, a few pickers begin playing and singing together. Then, like a planet forming from the accretion of orbiting particles, wandering musicians like what they hear, pull out their instruments and join in.

The jam grows and grows, going from modest beginnings to a grand ensemble, until, inevitably, it becomes too big – and reaches a point of diminishing returns. Around the time it gets big enough that it takes an hour for everyone in the jam to have a chance to call a song, it collapses under its own weight. Then the process begins again.

Organized jams have a lifespan, too, but it’s usually longer and the cycle of life is harder to discern.

The CBA does a great job of encouraging organized jams – they’re all over the place. But they take a considerable amount of work to begin, and to maintain.

A location must be found – it could be someone’s home, or it might be a public place that doesn’t mind being taken over by bluegrass pickers for a night. This can be good for a business, or can be bad, depending on a lot of factors. If the pickers also buy the food and/or drink the establishment offers, the establishment might tolerate not having patrons that night who don’t want to hear bluegrass (imagine that!).

Someone (or a few people) have to be in charge. They are usually the ones who scouted the location, and negotiated the terms with the venue. They are also the ones who work to publicize the event, and maintain some sort of order each time. A jam may be a weekly thing, or a monthly thing.

Once an organized jam is launched, if it attracts a base core of pickers who are there most of the time, it can really be an important part of some people’s lives. The regular pickers come to look forward to it, the organizers have fun with it, and there’s a constant influx of first-time visitors, some of whom become regulars, and this mitigates the normal attrition of regulars who stop coming for whatever reason.

If the jam can establish itself as a place where pickers of all skill levels can have fun, all the better. This requires the accomplished pickers to be patient and nurturing, but if they’re inclined to that sort of thing, it really lifts everyone’s experience up.

But there is a lifespan – a jam could go great guns for a year, 3 years, 10 years, and then, it can fall apart. I think the most common reason is a problem comes up with the venue  – lost lease, new ownership, or just a change in strategic direction. Sometimes the organizers want to step back and no one wants to take over.

Then, it’s back to the drawing board. I have several runs of open mic/jam bluegrass events at local venues, and we had many memories and laughs over the years. But the pandemic put the end to the latest, so I’m back to square one, examining the options to start all over again.  Folks gotta pick – I’ll come up with something!