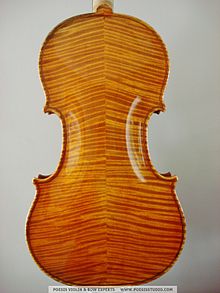 Guitars sales are a billion dollar a year industry in the U.S. and since instruments are made using the highest grade of the top 1% of commercially avaiable wood, competition to supply that demand is intense.  So intense that some thieves are tempted to raid our national forests in search of tone wood.

Fortunately, DNA technology has now come to our aid in solving one of these difficult to trace crimes.  Most of us are by now familiar with crimes being solved by tell tale DNA being left at a crime scene by a previously unsuspected perpetrator.  But in 2016 for the first time ever, DNA from a plant (a curly maple) was used to convict a national forest tone wood thief with a degree of certainty of one in one in one followed by 36 zeroes.

Harold Clause Kupers, a wood buyer and mill owner in Washington state, pled guilty in a District Court in Tacoma and was convicted under the Lacey Act which forbids harvesting material from national forests for commercial purposes.  Kupers taught three others how to identify and harvest the most desirable trees, known as “figured” bigleaf maple.  They sold stolen tone wood from our national forests worth a half a million dollars to to guitar manufacturers.

The Lacey Act is a law originally designed to rein in the illegal trade in wildlife and the act was amended in 2008 to include plants, thereby prohibiting the trade in illegally sourced wood. Gibson Guitars and Lumber Liquidators are two big companies who have been involved with importing illegal lumber under the Lacey Act.  Gibson settled out of court to avoid a criminal trial and Lumber Liquidators paid a thirteen million dollar fine for importing illegally sourced hardwood flooring from China.

As forests throughout the world are tapped out, reserves of tonewoods—typically mahogany, maple, ebony, and rosewood—are rapidly diminishing.  Rosewood is now among the world’s most overexploited and illegally trafficked resources—more than elephant ivory, pangolins, and rhino horn combined.

If you own a guitar made with rosewood you are lucky.  My Martin D-35 is a great sounding guitar but the the distinctive three triangle back was an innovation inspired by the scarcity of this prized tone wood.  Martin realized that some pieces of their tone wood inventory, while not suitable for the usual bookend back of the D-18 for example, could be sliced a bit more creatively and still make a great guitar.

In a sense the guitar market for tone woods like rosewood has become collateral damage to the furniture industry.  Rosewood can still be sourced from designated sustainable forests but the process involves a lot more red tape than before.  And if you travel to a country like Belgium for example, your guitar might not be confiscated (because you won’t have ten kilos of rosewood in it) but you might have trouble selling it unless you can prove that the rosewood is legit.

Musicians with old instruments made using ivory, tortoise shell, etc have faced these issues in recent years.  The resources of our planet are limited and they could disappear if we don’t manage them responsibly.  Maybe some day someone will figure out how to make a great sounding instrument out of something other than tone wood.  Carbon fiber seems promising but I have yet to hear a synthetic guitar that gives a tone as rich as a guitar made of wood.  In the meantime it’s up to the guitar manufacturers and their consumers to use tone woods judiciously.